June Kyu (Q) Park, assistant professor in the School of Communications program, welcomed Han for an intimate virtual conversation. Han participated from his home in Seoul, Korea, with assistance from Jason Yu, an interpreter. This engaging exchange reached an audience of over 100 Webster students, faculty and staff and created a social media buzz that reached over 1,000 people nationally and globally. 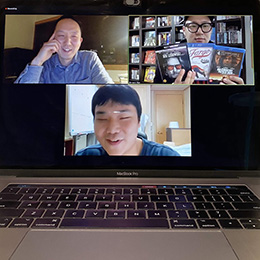 For his work on "Parasite,"Han received much critical appraisal and recognition, including an Academy Award for Best Original Screenplay. Han shared this award with Bong Joon-ho, and this made the two of them the first Asian writers to win any screenwriting Academy Award.

Throughout the conversatio,n Jin-won Han was eager to share stories of his life, research, passion for writing and filmmaking, and future in the industry. In his final words of the evening, he encouraged future screenwriters and filmmakers to “Just sit down and write!” and “Always believe in your decision, then put in the work!”

This event is one of many successful virtual events the School of Communications has been able to offer during the pandemic to continue student engagement and enrichment.

For more information on upcoming events, visit the School of Communications Hub website.