“At Webster University, we believe in being world-changers--both through our own behavior and as advocates. We are grateful for the partnership with the ARDN to further the U. N. Sustainable Development goals, which focus on tackling problems such as HIV/AIDS, poverty, hunger, clean water and sanitation, and quality education. These issues threaten populations, locally, nationally, and internationally,” Stroble said. “The ARDN Red Card program is a tool to raise the awareness of the damaging effects of violence and discrimination against women in all its forms. The goal of this campaign is to achieve 1 million signatures on the pledge to end such actions by the Nov. 21, 2022 FIFA World Cup Tournament in Qatar, using the raising of the red card as a universal symbol in sport.

“Webster is a natural partner for the ARDN, given our global mission and presence, including our 2014 opening of the campus in Ghana as the first U.S. accredited university to offer full degree programs on site in the country,” she added. “Our university's founding as one of the first women's colleges west of the Mississippi brings special meaning to the Red Card program; we are committed to creating strong and inclusive futures for all students and the communities they call home, locally and globally." 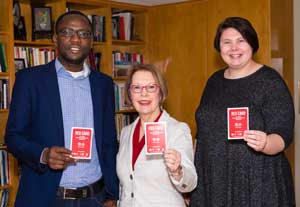 Stroble is currently a co-chair of the higher education initiative of ARDN. Webster University signed a partnership agreement with ARDN in 2017 and launched a set of global initiatives for HIV/AIDS awareness and prevention with ARDN in 2018.Stroble spoke at the ARDN sponsored “Africa: Open for Business Summit” at the United Nations in September 2018.

The ARDN is an international non-profit non-governmental organization headquartered in New York. Its mission is to accelerate the attainment of the African renaissance by advocating for and supporting United Nations programs, such as the Sustainable Development Goals. ARDN mobilizes the passion of government, educators, artists, intellectuals, the private sector, civil society and youth, using the power of art, sport and culture as vectors for creating a better world. ARDN serves as the Secretariat for the Global Alliance of Mayors and Leaders from Africa and of African Descent.

The ARDN is led by Djibril Diallo, the former regional director of UNAID and former director of the United Nations New York Office of Sport for Development and Peace. Diallo has over 30 years of executive leadership and managerial experience in the United Nations in the fields of emergency management, sustainable human development, advocacy, strategic communications, external relations and strategic communications, "Sport-for-Peace and Development" initiatives, youth leadership development, and multi-cultural development. He is fluent in 12 languages and hold a Ph. D in linguistics with an emphasis on educational communications from London University.

Stroble has a long history of working on equity issues on the local, national and international levels. She is an invited member to the Global Federation of Competitiveness Council’s University and Research Leadership Forum and a task force member to the Higher Education Recognition Project Task Force with St. Louis Graduates. She is a board member and co-chair of the Regional Higher Education Council for the St. Louis Regional Chamber, a member of the Council on Competitiveness and a member of the International Association of University Presidents.

Additionally, Stroble is a member of the International Women’s Forum, a member of the St. Louis Forum and aboard member and Chair of the Education Committee for the Urban League of Metropolitan St. Louis.

Last year, Stroble was named by Diverse Issues in Higher Education as one of the 35 top women in higher education. In 2017, Stroble was listed on the “The Top 50 Women in St. Louis in Media, The Arts, Business, Education, and More. . .” by Gazelle Magazine and also was presented with the “Diversity and Inclusion Award” by the Urban League of Metropolitan St. Louis.

In 2016, she was listed among the “The Power List: 100 People Shaping the Region” by St. Louis Magazine, “Twenty Influential St. Louisans” by Gazelle Magazine, and “50 Missourians You Should Know” by Ingram’s Magazine. That year she also earned the “Giving Back Award for Presidents and Chancellors” by Insight Into Diversity magazine.

The Webster University chess team won more titles than any other participating school at the 2021 U.S. Collegiate Rapid and Blitz Individual Championship....