Webster University alumnus Dana Snyder ’96 has been the voice of numerous characters on Adult Swim and for Disney, and more recently has been in the live-action workplace comedy Your Pretty Face is Going to Hell.

But for many of today’s high school and college-aged children, he is best known as the voice of Dr. Colosso, the supervillain in the live-action Nickelodeon show The Thundermans, a character so evil that he gives out toasters as wedding gifts and boos at funerals. Also, he’s a bunny.

The show aired from 2013 to 2018 and followed Hank and Barb Thunderman and their kids, who were a family of superheroes in the witness protection program and had to keep their powers a secret while still trying to live normal lives. Dr. Colosso, formerly Hank’s arch-nemesis turned into a rabbit by Hank, and now lives in the Thundermans’ basement with the oldest son, Max, who wants to become a supervillain himself.

Snyder, who earned a Bachelor of Fine Arts in Musical Theater from The Conservatory of Theatre Arts in the Leigh Gerdine College of Fine Arts, said working on The Thundermans was an interesting experience. He wasn’t actually on stage with the other actors, as his character was acted out through puppeteers. Rather, he had to put his voicework in after filming was completed. “There was one guy who would operate the puppet, and when he did it, he was the one reading the lines. So, I would go in about every four weeks with the director and do my lines,” he said.

I wouldn't be doing any of it, had it not been for Webster, because of the people I met there...The training we got at Webster was invaluable.

“It’s like doing an anime, where you have to put your voice in after the picture’s already done, which is more difficult because you don't get to do any of your ideas. You just have to make sure it matches with whatever is already going and sometimes to the director, I'd be like, ‘Man, I would have just done it like this.’ They're like, ‘Oh God, I wish we could have had you in there doing it.’”

Despite having stricter parameters over his lines than normal, though, Snyder said he loved doing the show. “It's not as stressful as working on a big network show. With that kind of stuff everybodys stressed because there's so much money and everything's on the line. But in shows like The Thundermans everyone was a little more laid back because it’s for kids,” he said. “Everybody was great. They're all wonderful people.”

Among his favorite memories on the show, though, were the times when Dr. Colosso was turned back into a human and he actually got to be on set. “My favorite episode was probably the first one where I was the human, which was a two-part episode. I think it's my favorite because I watch it and it brings back a lot of memories of the first time I met the cast. It was so much fun because I came in and they were like, ‘we're so glad to have you here because normally we don't hear you saying the lines; we hear these other guys,’” he said.

His career in voiceover work didn’t start right away. “I wouldn't be doing any of it, had it not been for Webster, because of the people I met there. A classmate I went to Webster with went to high school with one of the guys who was creating the Aqua Teen show and he called her up and said, ‘Do you know anybody who sounds like his mouth writes checks his body can't cash’ and then she said, ‘Oh, you should call my friend Dana. That's exactly what he sounds like.’” 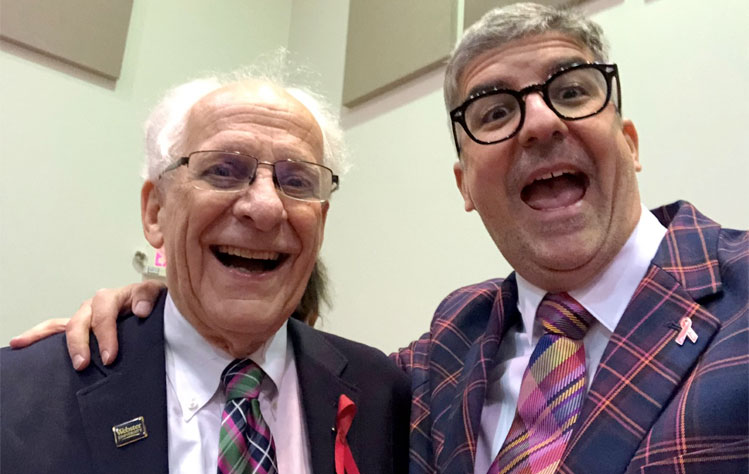 “[Dean] Peter Sargent was the guy who I auditioned for and was the reason I went to the Conservatory," said Snyder. "He was like, ‘Nah, you got to come here. This is the right place for you.’ And I didn't know what to expect. I was scared about going to Conservatory. I couldn't read music, any of that stuff, but he was like, ‘Dana. This is the place to go.’ The training we got at Webster was invaluable.”

The veteran actor had this advice to give to students who want to try to break into the industry. “For somebody starting out, take classes. Improv classes, acting classes, any kind of class you can take. It's not just about the training you're getting. It's also about meeting people in the classes. Because half the time they're taught by either voice directors or casting agents, and they'll help you and you might create a relationship that proves to be invaluable in the future. It's about building up relationships with people.”

But Snyder also added a word of caution when it comes to taking classes. “Ask around. Ask other people, ‘Have you taken this class?’ or if you're signing up for a class, say, ‘Can you give me the names of some of your other students some references?’ There's a lot of people in voiceover who tell you they're going to help you. And really, they're just there to prey on you because they know people are desperate to get into it. There's just a lot of predators that want to take your money and don't really have a lot to offer.”

“Everybody I know who's in voiceover has all gone about it and gotten into it in completely different ways and with every one of them, there all seems to be some element of luck of being in the right place at the right time and the right person asking the right question, but the people that are all successful in it that I know were also all prepared,” said Snyder.