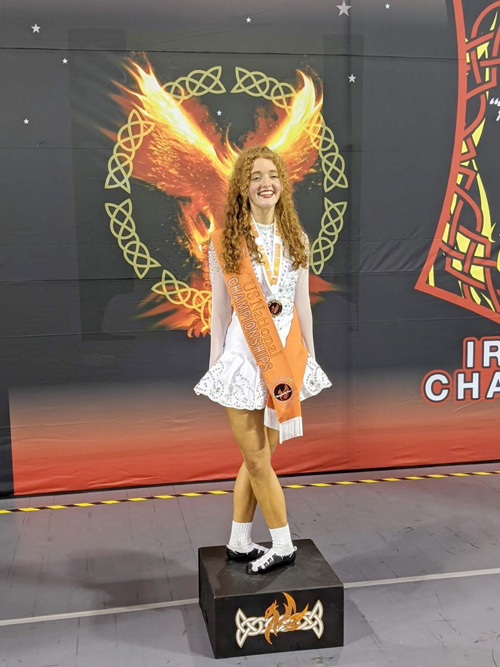 The World Irish Dancing Championships in Belfast, Northern Ireland, will see one of Webster’s own on its stage in 2022. Webster University sophomore Anika Wagner took third place against 85 other competitors during the U.S. National Irish Dancing Championships in Phoenix, Arizona, earlier this month, earning her a slot in the prestigious competition.

A Webster alumna also is headed to the championships in Belfast: Anika's sister Natalie Wagner, (pictured with Anika below left) a 2020 graduate, also competed at nationals in a different age group and placed 12th, also qualifying her for the world championship. “It’s pretty awesome that we get to train together for the championships,” Anika said.

Having good relationships with people in the community makes it a really supportive environment for dance day.

And the Webster connections don’t stop there. Anika is a student at The Clark Academy of Irish Dance in Crestwood, Missouri, and coached by Webster alumna Mary Jo (Clark) Cange (pictured with Anika below right), who was also inducted into the Webster Athletics Hall of Fame for her accomplishments while part of the University's women's soccer team.

“She is a wonderful teacher and coach; I’ve been training with her my whole Irish dancing career,” Anika said. “She works a really good balance between communication and pushing people. We have a very good environment at our school, and I think that all starts with her.” 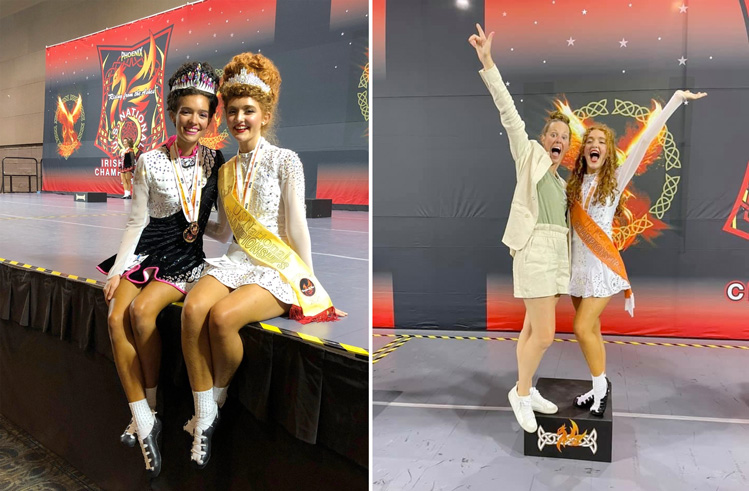 Anika said she has applied skills learned through her experiences in Webster LEADS that to her dancing. “I’ve noticed it in my interactions with people,” she said. “Having good relationships with people in the community makes it a really supportive environment for dance day.”

This is the first major competition that Anika has participated in since the beginning of the COVID-19 pandemic, so there was an heightened element of excitement—and a little nervousness— about performing. “I really enjoyed getting back on stage. Having that chance to perform and compete taken away from you is like training in nothingness, so when it got brought back into my life, it made it that much more special,” she said. “Having a big competition like the Nationals just made me appreciate it so much more.”

Anika was originally awarded fourth place in the competition but mistakes in the calculations meant new placements for her and several other competitors. “It was kind of like the Steve Harvey moment [the 2015 Miss Universe winner announcement error] of giving people the wrong scores,” she said. “Fortunately, as far as I know, nobody who won had it taken away from them, but a lot of people moved several places down or up.”

Anika had professinal pictures taken at the original awards ceremony when she thought she had gotten fourth place. “The next day we found out that I actually had gotten third and I took the professional photos in my fourth-place sash,” she recalled. “But it’s still fun. I laugh at it.”

Anika said the change in results were stressful and frustrating, but she understands that the organizers were also coming back from a pandemic that introduced challenges to how they would normally do things. “I’m still just really grateful for how everything turned out and I’m really looking forward to the World Championships next year. Getting the opportunity to dance in Ireland and explore the culture will be amazing!”