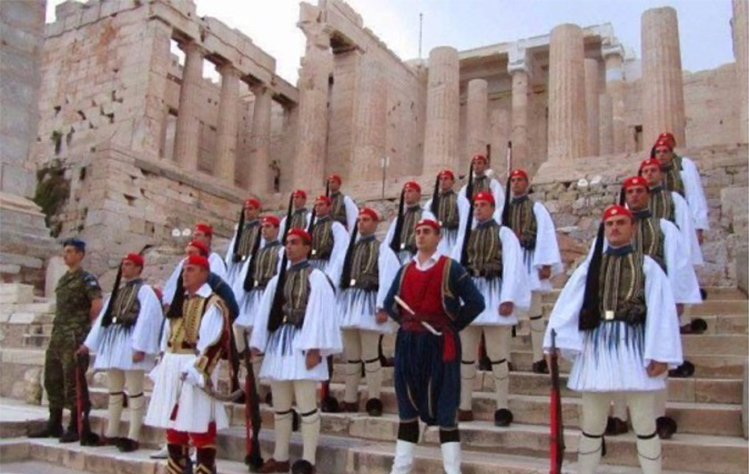 With the democratic values of freedom, liberty and independence under siege around the world today, we are reminded of this small country where all of these ideals began. Two hundred years ago, Greeks struggled and fought for their own independence against the Ottoman Turks, who ruled them for 400 years. Greeks came under the rule of the Ottomans in the 15th century, in the decades before and after the fall of Constantinople.

The “Greek Uprising” or “Epanastasi,” which means Revolution, was successfully waged between 1821 until 1833, when Greece was recognized as an independent state around the world. During the revolutionary years, Greece was assisted by Great Britain, Russia and France.

The Greek revolution is celebrated by Greeks all around the world as Independence Day on March 25, the same day as the feast of the Annunciation (the day Virgin Mary was visited by archangel Gabriel informing Her that She would be the Mother of Jesus) in the Greek Orthodox church. The Greeks fought bravely and names like Theodoris Kolokotronis, George Karaiskakis, General Yiannis Makriyannis, Laskarina Bouboulina and several others became heroes and are taught about in Greek schools today.

In light of this landmark event, Greece has established a committee named "Greece 2021" with the aim of coordinating many different events around Greece and abroad concentrating on the following objectives:

Likewise, the Onassis Foundation will be sponsoring many events in Greece and abroad (with the countries that played a major role in supporting the Greek revolution), in cooperation with academic, research and cultural institutions; preparations for the organization of conferences, exhibitions and musical events are under way.

Similarly, in an announcement made by the U.S. Ambassador to Greece, H.H. Geoffrey Pyatt, on Jan. 14, 2021, the U.S. Mission in Greece will host a year-long campaign to commemorate Greece’s Bicentennial entitled, “USA & Greece: Celebrating 200 Years of Friendship.”

The campaign will feature programs to celebrate Greece’s history, honor its people, highlight its achievements, and envision its future. According to the U.S. Embassy in Greece website, “The campaign will support this effort through programs designed to convey U..S respect for ancient Greek ideals of democracy that were an inspiration at the founding of our country (USA) and highlight the role American Philhellenes played in Greece’s fight to establish their country.

"It will also celebrate the strong people-to-people ties between the U.S. and Greece over the last 200 years, and our commitment to our present-day strategic partnership,” Ambassador Pyatt said. “U.S.-Greek relations are the best they’ve been in modern history.  Our friendship began during Greece’s war for independence, and Greece’s 2021 bicentennial is an opportunity to celebrate this history and the values of liberty and democracy our peoples have defended for over 200 years.”

Webster Athens is also celebrating this milestone with a Virtual Lecture Series. The first event will take place on Friday, March 26, 2021 and will feature Webster Athens’ distinguished Philosophy professor Stanley Sfekas, who will talk about “The Birth of the Modern Greek State.” The event will begin at 10 a.m. Central (5 p.m. Athens time) via Zoom.

Also, Webster Athens is featuring several courses that highlight modern Greece’s history and culture with lectures and visits to historic monuments and museums. Some of these courses will be offered virtually and will give students from abroad an opportunity to learn about the important role the Greek revolution played in world history. Students taking any of the virtual classes will be automatically given a $500 housing scholarship for future study abroad with Odyssey in Athens study abroad program.

To learn more about the events planned for 2021- visit the official website of the “Greece 2021” committee: www.greece2021.gr.

For more information on the virtual courses at Webster Athens and the zoom invitation for the Virtual Lecture Series, contact Dina Skias (skiasd@webster.edu).

On Monday, July 26, 2021, the health departments to the City of St. Louis and the St. Louis County jointly implemented a new mask mandate that requires...