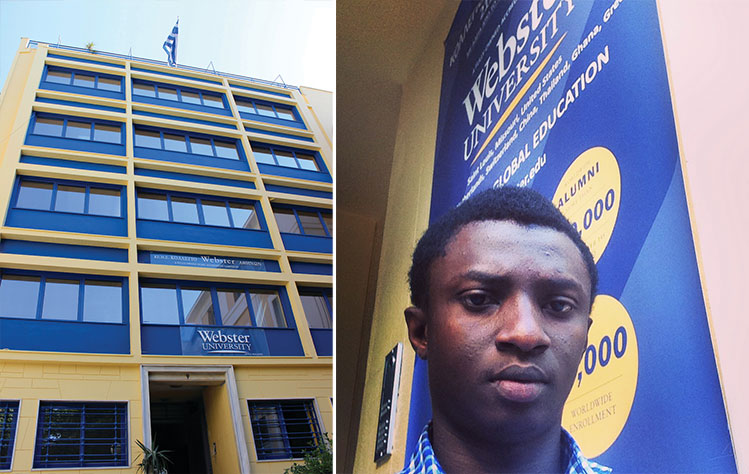 Lamine Farouk is a 22-year-old refugee from Mali in West Africa who, at the age of 18, arrived at Lesbos Island, Greece, from Turkey by boat. For 2 years he lived in the Moria camp in Lesbos, seeking asylum and a better, more secure world to live in. He is now a refugee in Greece under international protection. In early 2019, he was awarded a scholarship to study at Webster University, aided by what he calls his "European family," Michael and Pleuntje, who sponsored him in his studies. Farouk is now studying International Relations and Business at Webster Athens, and working at the humanitarian organization Doctors without Borders (MSF -Médecins Sans Frontiers) in Athens. 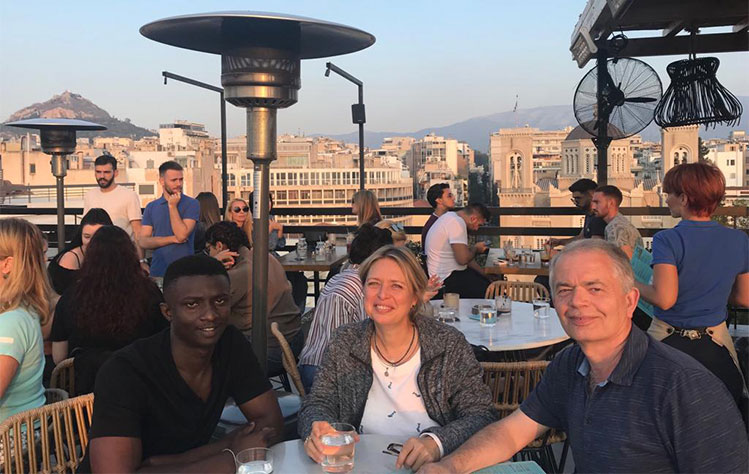 Lamine with his sponsored family Michael and Pleuntje at an Athens Café Terrace overlooking Acropolis.

Farouk's journey began at just 8 years old, when he left Mali with his father due to the instability and insecurity in the region, and moved to the English-speaking country of Sierra Leone, West Africa. His father encouraged him to learn English instead of only the African languages, so he could have the opportunity to study in any corner of the world and become a self-sufficient and successful global citizen. The only child of both his parents, his mother was a housewife and a small business owner, and his father was also a businessman.

“I wish to grow to be a leader that can help many others. I also can imagine myself as an entrepreneur or in an organization or an international NGO. This education idea that I am presently pursuing seems to prepare me for a better future,” wrote Lamine in his “About Me” story for the Global Cornerstone Seminar course.

For me, success in life is to give back what society has given you.

But for Farouk, a successful citizen of the world is not the one who has freedom, power, and money. “For me, success in life is to give back what society has given you. I have been helped by good people through my journey, and if I am able to achieve my dream and help others achieve theirs, I think that is what I will call true success.”

He is focusing on wellness by playing soccer, running, and reading fiction books. He speaks English and French, and now he is learning Greek.

I wish to grow to be a leader that can help many others...This education idea that I am presently pursuing seems to prepare me for a better future.

“I was obliged to seek asylum as the law stated, and I was to live in the camp as well as be an asylum seeker. There are other refugees in the same situation,” wrote Lamine in his Journal paper on “Media Diversity & Society” course this Fall.

According to the course description, students were asked to write about a "Personal experience that changed their life," based on the assumption that experience, beliefs, and feelings are integral to creating meaning about individuals, groups, and their depiction in the media.

Lamine wanted to share his experience not only with his classmates but within the global Webster community, not because his story is more turbulent or successful than others, but because it might be meaningful and create hope for others.

For him, inclusion is the key, and education without borders is the cornerstone of life. That’s why he made it clear that inclusion is not only part of his life but his mission.” "We are all human, and it is just by chance we found ourselves in a particular territory we called our country. All humans have potential, and we can only show this if we feel included in the society."

The Women’s Business Initiative International (WBII) and Webster Leiden campus again joined together to host the Fall 2021 Start Your Own Business...