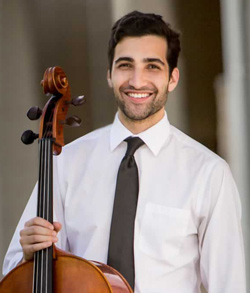 A look at the Community Music School website or ensembles catalog reveals a wide array of choices for students of all ages, abilities and backgrounds. Some students though, participate in just about everything the school offers! In that sense, cellist Daniel Kopp is a true son of the Community Music School. Beginning at age 10, Daniel became part of beloved Mary Lou Gotman’s Suzuki cello studio. He participated in the entire sequence of CMS orchestras and ultimately the Preparatory Program.

Around 6th grade, Daniel had a defining experience: he played his first piece of chamber music with fellow CMS cellist, Richard Mazuski. His first string quartet experience came in 8th grade, and he found himself hooked for life.  Daniel was a member of a Fischoff competition quartet through Prep, and was also selected for the National Youth Orchestra. He continued cello study at the CMS with Catherine Lehr Ramos. Upon graduation from Ladue High School, he attended Rice University as a cello performance major under Norman Fischer. Pleased with the warm winters and breakfast tacos, he next found himself in Austin as a graduate student at the University of Texas.

Since completing his masters degree, Daniel’s career path reflects those passions cultivated in his youth at the CMS: chamber music, teaching and orchestral playing.  Describing himself as “passionate about teaching,” Daniel is on faculty with the Clavier-Werke School of Music, the University of Texas String Project, and the innovative Austin Chamber Music Center. He additionally co-founded the Austin Camerata, serving as Artistic Director and cellist, bringing collaborations of chamber music, dance, and storytelling to venues such as libraries, schools, hospitals, private halls and public  spaces across central Texas.

Austin Camerata has been praised for its “unadulterated beauty” and nominated by the Austin Critics Table for “best classical ensemble.” Daniel has also had great experiences as a member of several summer music festival orchestras. Last summer he collaborated with another CMS alum, violinist Sean Riley, to stage yard concerts for Austin residents during the pandemic. Sean’s wife, Sarah, also played in CMS orchestras as a child, and appeared on the school’s catalog cover for several years.

Daniel acknowledges that the fantastic foundation he received through outstanding teaching from a young age, and exceptional performance experiences through Prep, school recitals and orchestras predisposed him to acceptance at excellent college choices with great scholarships, and the tools and passions to create new artistic outlets. He is also grateful for his wonderful parents, Shelby and Suzanne Kopp, for their love of classical music and commitment to providing their children with the best musical education possible.

The Alumni Association hosted its first Virtual Young Alumni Happy Hour on March 18, 2021, with great success. While in the past in-person events...