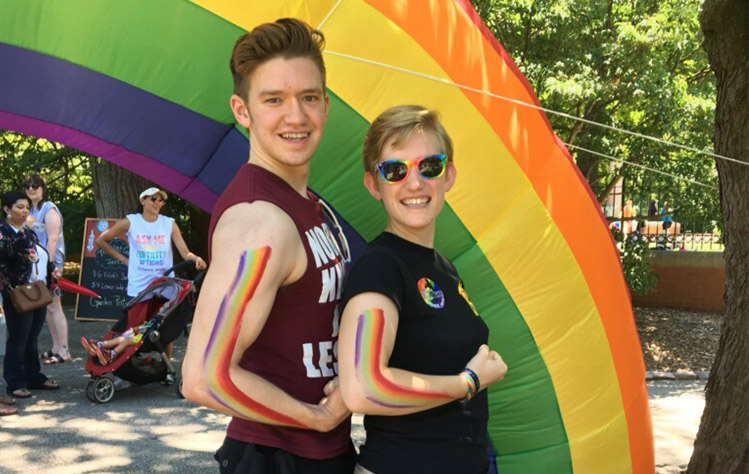 When graduating seniors Emme Perkins and Nate Garner started their podcast "Les Be Gay," in October of last year, it was because they needed a creative outlet and because of pandemic boredom. But now it has been ranked number 13 out of 100 in a list of top LGBT podcasts.

Perkins and Garner found out about their inclusion on the ranking through a friend, who was a guest star in episode 24. “My friend said, ‘Oh, congrats on being the number 13 queer podcast,’ and I was completely surprised. I Googled it and found the list and I was like, ‘Holy cow! Wow, look at that!’” Perkins said.

All of this came just six months after starting the podcast, with the pair recently releasing their 26th episode. “It was a great list to be on,” Garner said. "There were a lot of other podcasts on there that we listen to and respect a lot.

The two met in the Conservatory during their freshman year and got closer over their sophomore year. “We had a scene together in acting class and we’re like, ‘Oh, yeah, we’re best friends now,’” Perkins said.

“We’ve been inseparable since,” Garner said. “We know everything about each other and there were plenty of conversations that Emme and I were having already that we were just like, I think other people might want to hear this, too.”

In the podcast, the two discuss the queer experience, but through the lens of growing up in the Midwest, Garner said. “I think the biggest shtick is that we both grew up in these small towns, and came here and met through college, but our queer experience was not this extreme liberal bubble, and it also wasn’t this totally condemning, conservative upbringing either, so we both found we were in this middle place that we call awkward.”

“Representation, culture, and experience are the three main topics we cover, and anything within that,” Perkins said. “We’ve also talked about how acting, and this industry as a whole has affected our relationship with our identity.”

Garner added that some other topics covered on their podcast include coming out and dating.

“Representation, culture, and experience are the three main topics ... We’ve also talked about how acting, and this industry affected our relationship with our identity.”

Both Garner and Perkins emphasized that they try hard to speak from their own personal experiences because that’s what they know. “We don’t want to talk on behalf of communities that aren’t in the room, and we’ve brought in guests to make sure that other voices are heard,” Garner said.

They started the podcast as a creative outlet during the pandemic, Perkins said. “We’re performance majors in the Conservatory, so creating content is important to us,” she said. “I also wanted it as an excuse to celebrate our identity every week. When we started it, I was like, ‘I don't even care if only one person listens to this; I just want to make this thing and put in into the world.’”

“We were figuring out who we were, coming into our own identity and trying to become more comfortable with it,” Garner agreed. “We didn’t go into it saying, ‘we need to make it big.’”

But neither of them expected the podcast to take off like it did. “People will message us through our Instagram and will say, ‘oh, I found your podcast and it’s been so great; I don’t have a lot of queer friends and listening to your podcast has been so helpful,’” Perkins said. “It’s been really cool to be able to reach people like that.”

“The strongest feedback we’ve gotten is from people in these small towns who resonate with our stories, because they are also in this middle ground. No one really talks about it, but it’s such a specific experience,” Garner said. “It’s really cool, finding out that people other than classmates and people from our hometown listen to us. We get little messages from people sometimes, but we didn’t realize that people saw us as much as they did. We've got listeners across the world at this point.”

Be yourself and be genuine. That’s a lot of the sparkle in ours, just that we bring so much of our own personal stories

Perkins and Garner both had some advice to give to those who want to start their own podcasts. “Have a clear idea of what you want it to be about and think about who your audience is going to be because you need to have an audience for people to listen to it,” Perkins said.

“Be yourself and be genuine. I think that’s a lot of the sparkle in ours, is just that we bring so much of our own personal stories into it and people really relate to that because it is just so honest,” Garner said. “The audience came naturally after that.”

Garner continued, “This year has been really hard for everyone, but especially for us as theatre artists trying to do our senior year online. This podcast has not only been a motivator to keep going through, but also, it’s been heartwarming to see the people who have reached out and responded to us about it. And that’s been a really strong motivator, too, so I'm just glad that this podcast exists, and that people are listening to it.”

“When making this podcast, my goal was to create something that I would’ve loved to have in High School and when I was coming out and realizing who I was, and so, that’s kind of what we’ve been trying to do as well,” Perkins said. “I feel so privileged to be able to create it and to have the platform to speak my voice and be my authentic self and be proud to be gay.”

Their podcast, “Les Be Gay,” can be found on Spotify, Apple podcasts, Google podcasts, and Anchor