Feb. 9 was officially declared International Greek Language Day in 2017, to honor, recognize and celebrate the Greek language around the world for its contribution in shaping Western civilization throughout the centuries. This date was selected as it is the official date commemorating the Greek National Poet, Dionysis Solomos, who wrote the Greek national anthem, “Hymn to Liberty”) - (Ύμνος εις την Ελευθερίαν’).

Greek language is the foundational language, in scientific terms and usage, of Western science, especially astronomy, mathematics, logic, and philosophy. Countless Greek words enrich other languages, culminating in the international medical terminology in which about 80 percent of the scientific terms have a Greek root. Ancient Greek literature includes works such as the epic poems of the Iliad and the Odyssey, Platonic dialogues and the works of Aristotle.

One of the most popular Signature Courses with study abroad and international students is Elementary Modern Greek language class. Students are fascinated, but also initially intimidated by the Greek language. Despite their initial intimidation, they quickly learn that it is a relatively easy language to understand and they are amazed at how enjoyable it is to learn. They also find that even though English is widely spoken in Greece, especially in Athens, that learning some conversational Greek helps them to connect on a different level with the local community. They really enjoy practicing the Greek they learn in class with their fellow students or out in the community.

“I don’t know how many times students would come to my office and tell me they were given a free pastry from the bakery or a free beverage from the café or simply being praised because they spoke in Greek to the server,” stated Dina Skias, director of Student Affairs and Odyssey in Athens Study Abroad Program. “Students really enjoy practicing what they learn in class. I will never forget on a program excursion to the Peleponnese, where a Webster student, who was taking the second level of elementary Greek language, was able to understand and have a basic conversation with an elderly woman from the village. For me, this was the epitome of success of studying abroad,” said Skias.

For more information on the Odyssey in Athens program and the signature courses at Webster Athens, contact Skias at skiasd@webster.edu. 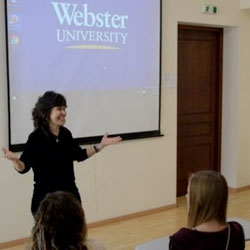 “Teaching the Elementary and Intermediate Modern Greek classes has always been a great pleasure for me. I will agree with Ms. Dina Skias that at first the students feel apprehensive and uneasy with the Greek language, but after the first couple of weeks, they are driven to use it and even quite well, in fact! Throughout the course, they understand that Greek is a sensible and comprehensible language to learn and that in time they will be able to speak it without much difficulty; eventually, the students realize that this is the case, and they practice using the language with the locals, the Greek students, and their professors. Primarily, survival Greek is the aim of the course so that students will feel comfortable and proud of themselves being able to communicate and integrate within the daily society. What fascinates me the most in teaching these classes is the students' enthusiasm, motivation, and hard effort all along in excelling and making this experience worthwhile and meaningful to them and to me! At the end of these courses, the students are able to surprise themselves and often exclaim that ‘This is not all Greek to me anymore!’” 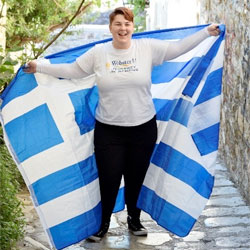 “I came to Greece with absolutely no knowledge of the language. I remember feeling intimidated at first by the alphabet and not sure if I would get the hang of it. My first class changed that completely and I ended up falling in love with the language. I discovered how sensible it was to me. By the end of the class, I was introducing myself and ordering drinks with ease. I enjoyed the class so much I ended up taking three more courses in Greek and enjoyed speaking with my teacher and the locals!” 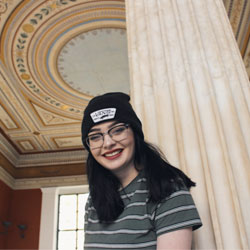 “When I first came to Greece, it was impossible to ignore the obvious language differences - the difference between the Greek alphabet and the English alphabet was daunting. I managed to decipher that Αθήνα translated to Athens, but the rest was too advanced for me. I decided to enroll in the Greek language course so that I could completely immerse myself in Greek culture, and it was honestly one of the best decisions I made about my study abroad experience. Professor Vasiliou made learning Greek fun and easy - within just a few classes, I was able to have short conversations with locals. My friends and I managed to introduce ourselves to the owners of a small cafe down the street from the University, and as I learned more Greek, I was able to share more about myself with others. By the end of my time in Greece, I was able to speak conversational Greek quite well. I could introduce myself, talk about where I was from, order food in restaurants, ask for directions, and much more. It enhanced my experience tremendously by giving me the ability to navigate the city and speak in the native tongue. If you are interested in learning Greek, I highly encourage you to pursue it. Honestly, it comes quite naturally - especially if you're taught by the lovely Professor Vasiliou at the Athens campus. Do yourself a favor and learn some Greek!” 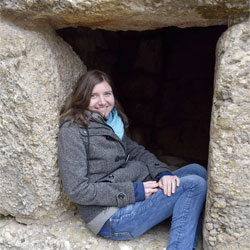 “I met someone on a night ferry to Crete and we started speaking in English, but when they learned I’d taken a little Greek we had a conversation that way. After that very simple conversation we continued to talk in English about our own cultures and compare how we celebrate different holidays. This encounter probably wouldn’t have evolved like this if I hadn’t completed the Greek language course the month before.”

Uniqueness of the Greek Language

According to a recent article on the Greek language in the international edition of The Guardian, “Almost no tongue has been spoken as continuously as Greek, used without respite in roughly the same geographical region for 40 centuries. Its influence, as the language of the New Testament and as a vehicle of thought for golden age playwrights, scientists and philosophers, helped it withstand the test of time.”

“The Greek alphabet when vocally spoken is an invocation. From this we come to understand that the Ancient Greek language is a mathematical and coded language. Proof of this is: that the Ancient Greeks, never used numbers or numerals but in fact, the letters of the alphabet.” - from the Greek City Times

Today's world owes a great deal to the Ancient Greeks, not only for laying the foundations of democracy and Western civilization, but also for giving us this rich language that influenced so much of the world.