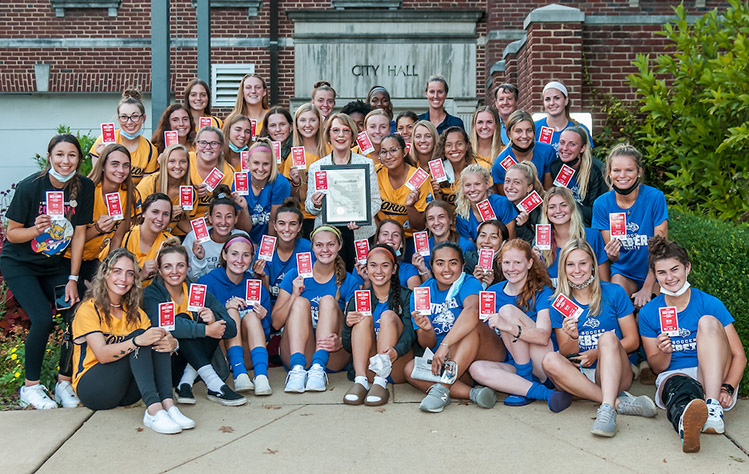 The City of Webster Groves and Webster University jointly proclaimed Oct. 11 as Red Card Pledge Day, in recognition of the International Day of the Girl Child and joint efforts to increase awareness of discrimination and violence against women and girls around the globe.

Members of the Webster University women's soccer and softball teams and Athletics staff and coaches were in attendance for the reading of the proclamation at City Hall, as they joined Mayor Gerry Welch and Chancellor Beth Stroble in symbolically raising the red card.

On Oct. 11, a Red Card rally will be held at 3 p.m. on the main campus, and related events will follow this year throughout the Webster campus network.

Launched in 2020 at United Nations headquarters with the African Renaissance Diaspora Network (ARDN), the international “Red Card” campaign raises awareness about domestic violence and gather personal pledges from people around the world to prevent discrimination and violence against women and girls. The campaign goal is to achieve 1 million signatures on the pledge to end such actions by the Nov. 21, 2022 FIFA World Cup Tournament in Qatar.

Above: Mayor Gerry Welch read the proclamation, then joined Webster University athletes and Chancellor Stroble in raising the red card.

WHEREAS, while the Women’s World Cup in 2019 highlighted women’s outstanding achievements in sports it also brought attention to the women and girls around the world that experience discrimination and violence, are denied opportunities to participate in education, sports, and government, and suffer physical and emotional abuse; and

WHEREAS, in soccer a Red Card is given to a player on the field who engages in unfair practices and bad behavior; and

WHEREAS, the Red Card project, a program created by several international organizations such as UN Women, is an extension of the soccer Red Card practice of calling out bad behavior by urging that a Red Card Pledge be taken as a symbol of opposition to discrimination and violence against women and girls; and

WHEREAS, Webster University and the City of Webster Groves have teamed up to urge the signing of the Red Card Pledge: “I pledge to fully respect every other human being, regardless of gender, culture, color, language, social origin, birth, property or religion, hence to put an end to all forms of discrimination and violence against women and girls. “

WHEREAS, the United Nations and other international organizations have annually declared October 11 as the “International Day of the Girl Child” to bring awareness and solutions to the challenges girls around the world face.

NOW, THEREFORE, THE CITY COUNCIL, TOGETHER WITH WEBSTER UNIVERSITY, HEREBY PROCLAIM: “OCTOBER 11, 2021, AS RED CARD PLEDGE DAY IN THE CITY OF WEBSTER GROVES” TO INCREASE AWARENESS OF THE DISCRIMINATION AND VIOLENCE FELT BY WOMEN AND CHILDREN AROUND THE GLOBE AND TO STRENGTHEN ALL EFFORTS TO CHANGE LIFE FOR SO MANY.

About the Red Card Campaign

Learn more in this video: