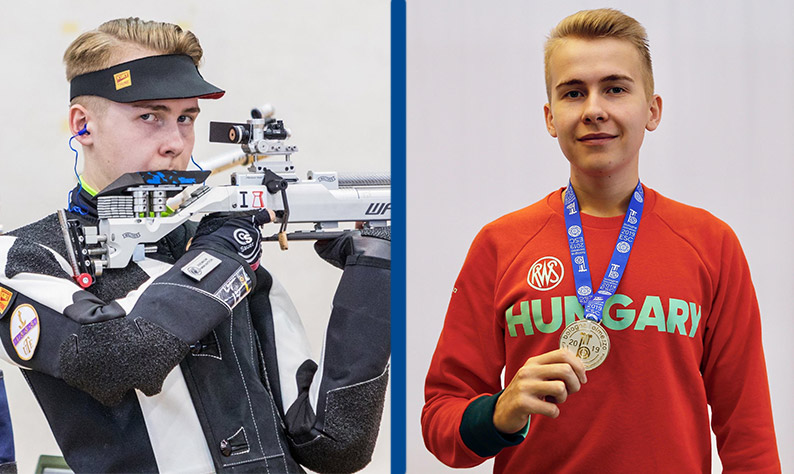 According to famous contemporary psycholinguist Frank Smith, “One language sets you in a corridor for life. Two languages open every door along the way.” That insight perfectly describes Webster international relations student Viktor Kiss and his desire to go the extra mile.

Born in Budapest, at 19 years old he has already learned to speak Russian, German and Ukrainian, as well as English and his native Hungarian.

As Kiss admits, learning languages makes familiarity with different cultures unavoidable, which further spurred his interest in the study of international relations and ultimately led him to Webster Vienna Private University.

The surprises do not end there, as doors keep opening for him along the way, including one of his athletic pursuits: He has been practicing Olympic Target Shooting since the age of 13.

"My efforts qualify me for a slot in the Hungarian national team since 2018," Kiss said. "My goal is to surpass my personal bests through competitions, thus to hopefully qualify for the Olympic team and onto the podium."

[Despite pandemic restrictions] my classmates are all exciting people with varying backgrounds, which makes teamwork and collaboration that much more engaging

His passion for international relations, together with his background as an alumnus of the American International School of Budapest, led him to realize that Webster Vienna truly resonated with him.

The institution's proximity to his hometown allowed him to further experience the benefits of an American education in an amazing European setting, while still granting him the opportunity to travel home to fulfill both his athletic responsibilities and his military service.

After all, Vienna is just two hours away by train from Budapest. "The dual diploma is the cherry on top of all the other amazing aspects of Webster Vienna," he laughed, reflecting on his plans to attain a BA and MA in International Relations.

Beginning during the Pandemic

However, his first semester at Webster Vienna has hardly been smooth sailing because – as students all over Europe are experiencing – the lack of in-person teaching, resulting from the government measures during the pandemic, has consequences for freshmen students.

As Kiss explained: "I kickstarted my first year through online courses, which makes it difficult to make friends. Nevertheless, my classmates are all exciting people with varying backgrounds, which makes teamwork and collaboration that much more engaging and a unique experience.”

Even though he has not yet signed up for a club, Kiss plans to be more engaged with his peers in future terms.

Enjoying a City of Art and History

As many students realize, without Vienna itself, Webster Vienna would not be complete. The art, history, and architecture are the aspects of the capital that Kiss enjoys the most.

"A walk among the historic buildings and museums makes me relaxed, energized, and ready for class," he said.

Following his bachelor's and intended master's degrees, Kiss said that he aims to "get involved in diplomacy and peacekeeping. I would also like to take my skills in sport shooting to the highest possible level, which will hopefully result in Olympic participation or even a medal."

As one last piece of advice for his fellow students: "Get involved, guys! Exploit the opportunities because Webster Vienna hides loads of amazing surprises."