'U.S., Russia and Ukraine: Prelude to Conflict?' Lecture at Geneva

In the aftermath of the end of the Cold War during 1989-1991, many expected that the fall of the Berlin Wall and the lifting of the Iron Curtain separating Eastern and Western Europe and the rapprochement between the Russian Federation and the United States would usher in a new era of peace and cooperation in world affairs. However, the initial thaw and the turbulent years of the Boris Yeltsin presidency in the 1990s, gave way to the gradual deterioration of East-West relations and the rise of Vladimir Putin's increasingly authoritarian presidency in the 21st century. Relations between the West and Russia reached a nadir and tensions rose to an all-time high with the dispute over NATO expansion eastward and the status of Ukraine. In recent months, tensions increased markedly as Russia deployed large numbers troops along its joint frontier with Ukraine and drew Belarus closer to its orbit, perhaps in a bid to use its territory and air space in the event of a full-scale conflagration. 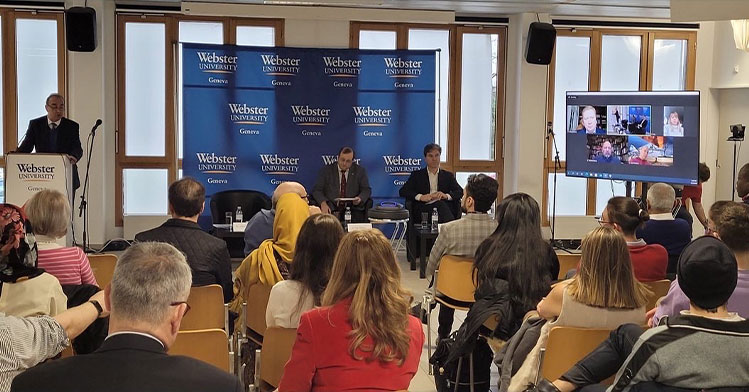 In order to assess the crisis, the International Relations Department at Webster University's Geneva campus held a hybrid event on Feb. 22, bringing together a number of scholars and specialists from the Geneva area and abroad to discuss the background, context and implications of recent developments involving the U.S., Europe, Russia and Ukraine. Overall, the event was well-attended, with over 100 participants in the LLC Common and others following online via Zoom. Afterwards there were questions and answers, and a lively discussion ensued. The event was moderated by Jubin Goodarzi, the acting director of the International Relations Program at Webster Geneva, and was organized with the support and assistance of Dounia El-Jaouhari, events coordinator, and students Jonathan Windmuller and Anhelina Tkachenko.

In his presentation, Paul Vallet, an associate fellow the Geneva Centre for Security Policy (GCSP), shed light on background of the conflict regarding Ukraine. He explained that the overture by the European Union in 2013-2014 to conclude an association agreement with Ukraine was interpreted by Russia as a stepping stone toward eventual NATO membership for the Ukrainians, something which was totally unacceptable for Moscow. Vallet elucidated that prior to this development, both Ukraine and Belarus had attempted to strike a delicate balancing act between the East and West, but this policy became untenable in the aftermath of the political crisis in Ukraine leading to the ouster of President Viktor Yanukovych in February 2014. Although the EU tried to mediate between Russia and Ukraine, it lacked political leverage. Furthermore, it did not enjoy strategic independence vis-à-vis the US and was dependent on energy supplies from Russia.

Professor Richard Sakwa from the University of Kent in Canterbury, England believed that Russia had crossed the Rubicon by recognizing the independence of the breakaway regions of Donetsk and Luhansk in Ukraine. He asserted that the issue of European security should be viewed in an holistic manner, taking into consideration Russian concerns. He pointed out that as early as 1994, then Russian President Boris Yeltsin had voiced strong opposition to possible NATO expansion eastward. Sakwa argued that Washington was attempting to assert its hegemony internationally and the NATO expansion was manifestation of this policy. Furthermore, he posited that although Ukrainian President Volodymyr Zelensky initially want to reach some sort of accommodation with Vladimir Putin, he became a hostage to the agenda of Ukrainian nationalists.

Vicken Cheterian, a member of the research faculty at Webster University Geneva and a lecturer at the Global Studies Institute of the Univerity of Geneva, underscored the degree of victimization and suffering that Ukrainians have experienced over the past century as a result of political upheavals and conflicts, including the Russian Revolution, the Russian Civil War and the Second World War. He highlighted that Ukraine is of vital strategic importance to Russia. Cheterian asserted that in view of Russia’s aggressive actions in annexing Crimea and intervening in the Donbass region, Ukraine had no choice but to turn to the West. Furthermore, he pointed out that Moscow does not recognize the Line of Control (LOC) in the Donbass region and will attempt to push Ukrainian forces out of this territory.

Professor Dmitry Suslov of the National Research University’s High School of Economics in Moscow stated that Vladimir Putin had made a major mistake by extending recognition to the independence of Donetsk and Luhansk. He prophetically predicted that this would lead to outright confrontation and conflict, which indeed occurred less than 48 hours later with the outbreak of fighting between Russia and Ukraine. Moscow wants to have full decision-making over the status of Ukraine and ultimately wants Ukraine to be at minimum a neutral buffer state between Russia and NATO.

On Saturday, May 14, Webster University Geneva hosted its annual Commencement at the lakeside President Wilson Hotel, both to celebrate graduates...

Professor Jeffrey Carter was elected as governor-elect of the Central Region of the National Association of Teachers of Singing. Associate Professor...