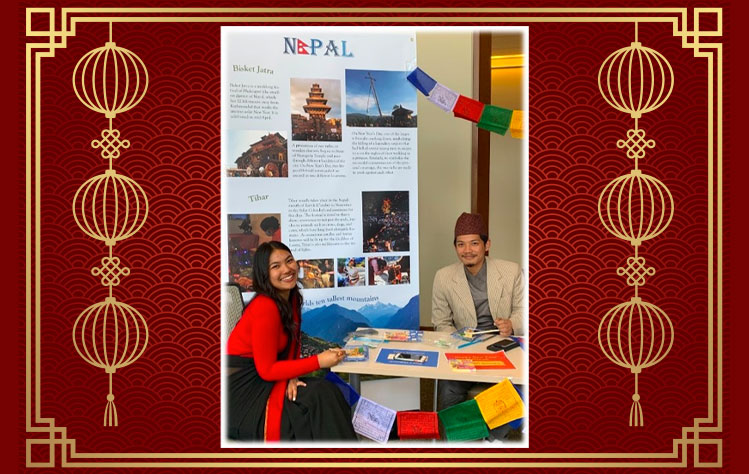 The long-awaited Lunar New Year Across Asia festival took place at the main campus on April 4, after being postponed due to COVID concerns. Though too late to observe according to the Chinese lunar calendar, the event was just in time for Nepalese New Year observed on April 14. Sponsored by the Confucius Institute, Webster University faculty, staff, and students came together in the East Academic Building Commons to observe the Lunar New Year, a staple which unites quite a number of cultures across Asia in celebration.

Ginger Hu, adjunct faculty member in the Global Languages, Cultures and Societies Department, helped to run the table dedicated to Chinese Lunar New Year traditions. “I think we had a great turnout!” said Hu. “Students were very eager to learn about all the different countries. And they especially liked the raffle prizes!” Students could spin to win keychains of a plush tiger, a zodiac wheel or a dancing dragon. 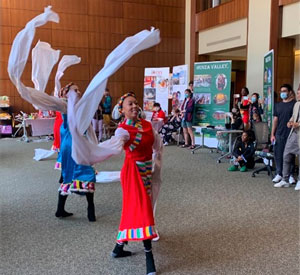 Smriti Shrestha, an international student from Nepal, can attest to the size of the crowds. She “held the floor” almost all day, posing for pictures and capturing the interest of passersby with her presentation about Nepali festivals, the Sherpa ethnic group, and the Gurkha soldiers. “It meant a lot to me that so many people wanted to learn about my culture.”

The dancers were a big hit with the crowd. “I can’t imagine the dedication it took them to learn those steps,” said attendee Michelle Milla. “As soon as it was finished, I couldn’t help but want to see even more dances!” 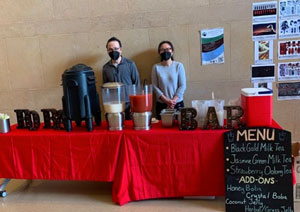 A variety of tasty treats were on hand for students: momos, pork buns, sushi, and shrimp dumplings, among others. The biggest hit was the samosas from Mideast Market, much to the delight of Khousleem Bano, an international student from Pakistan who helped to bring samples from Mideast Market to the celebration. “I heard everybody went for those first,” said Bano.

Altogether, the event was so well-received that students clamored for more content. “I would absolutely love to participate in another event like this in the future. The interactive format made it compelling in a way that a presentation just cannot do. I’m so grateful for having the opportunity to learn about Asian culture in this way,” said Milla.

The long-awaited Lunar New Year Across Asia festival took place on April 4 after being postponed due to pandemic concerns. Though too late to observe...