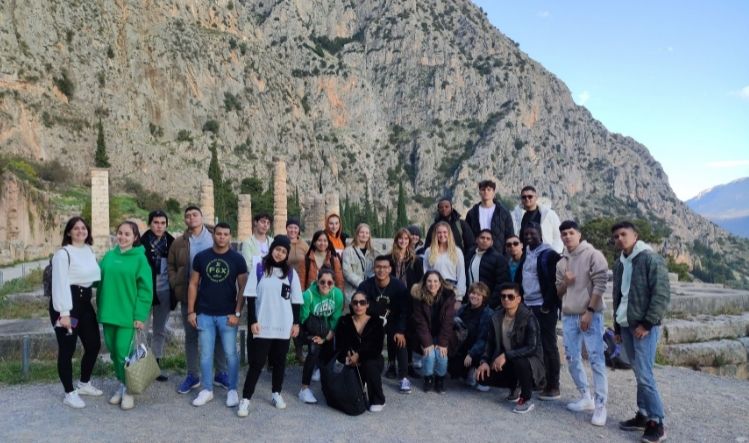 A few of the highlights of Webster University's Odyssey in Athens study abroad program are the excursions and field trips around Athens and other historic regions in Greece. Last semester, even with the difficulties related to the pandemic, the study abroad students managed to visit several areas in Greece through the program. (Above photo: Students at the Temple of Apollo in Delphi)

The Temple of Poseidon at Cape Sounio was the first site visited. After a two-hour ride along the seaside, the students enjoyed swimming in the sea below the temple and eating at one of the fish tavernas on the beach.

They then explored the temple until sunset and learned about the ancient mythological story of King Aegeus and his association with the site. King Aegeus jumped off the cliff to his death in despair, erroneously believing his son, Theseus, died in his attempts to kill the infamous Minotaur (half man- half bull) of Crete. The legend has it that the sea below was then named Aegean Sea after King Aegeus.

There is so much that I learned this semester that I would not have been made aware of if it weren’t for this class...I am grateful for the in-depth learning experience."

The students then traveled to the Peloponnese for a weekend trip. They visited Ancient Olympia, where they learned about the origins of the ancient Olympic games; the archaeological site of Mycenae, where they learned about the rise and fall of this great civilization, the characteristic Mycenaean architecture, and the beehive tombs; the ancient theatre of Epidaurus, learning about the significance of theatre in ancient Greece; and the Temple of Asclepios, the first healing sanctuary where people would come from near and far to be treated for their ailments.

(Above: Guided tour in Ancient Olympia)

Also in Olympia, they were fortunate to witness the rehearsal of the torch lighting ceremony, which would officially take place only a few days later, for the winter Olympic Games in Beijing, China, in 2022.

Being able to stand in the place where historically significant events took place provided an irreplaceable aspect to my understanding and appreciation of this history."

Likewise, in the Peloponnese, they toured the coastal town of Nafplio, the first capital of Greece from 1827-1834. The weather was perfect for exploring the Venetian fortress of Palamidi and walking along the narrow, bustling streets of the town filled with Venetian houses, neoclassical mansions, museums, souvenir stores and a multitude of eating establishments and cafes. 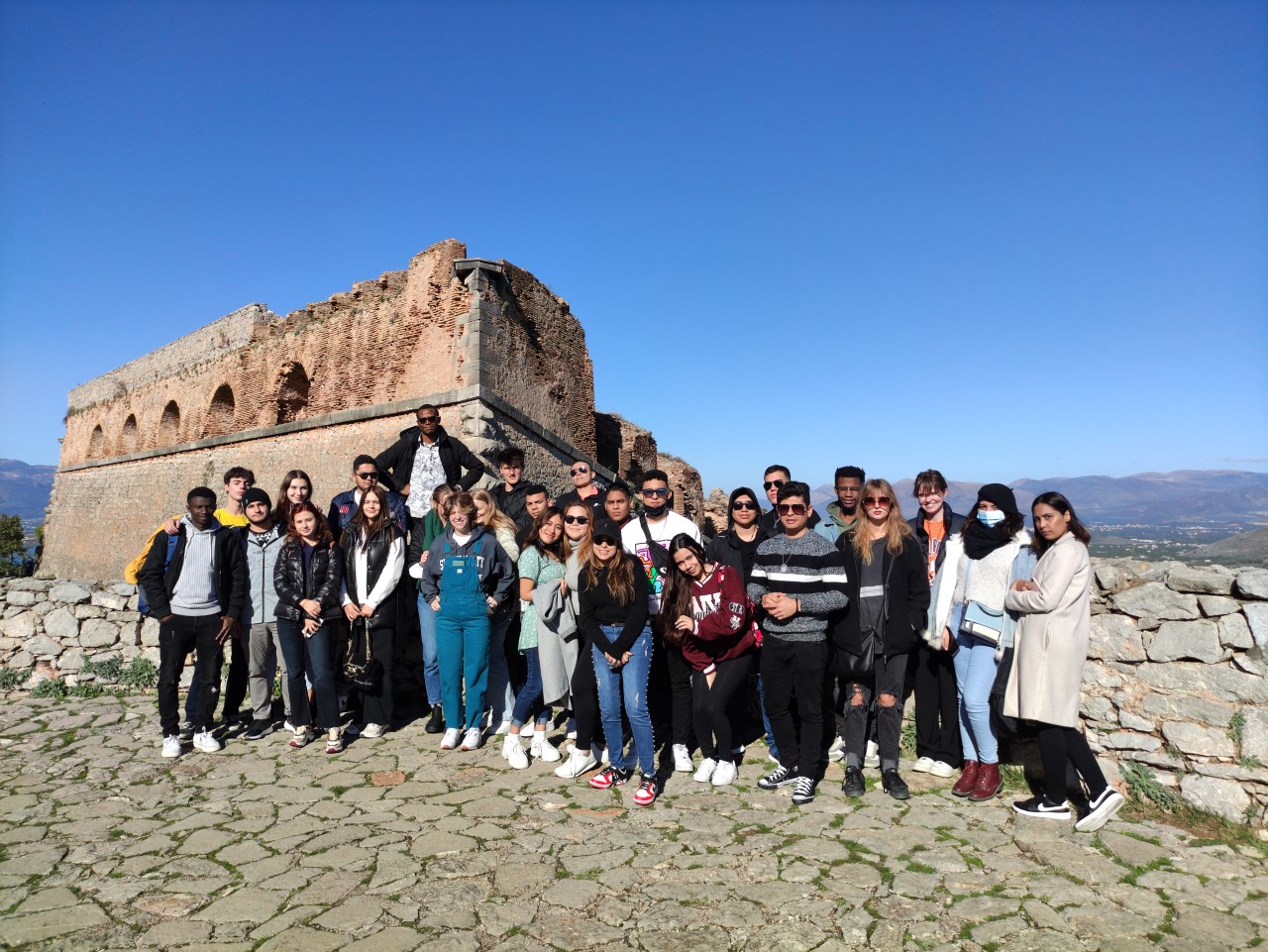 (Above: Palamidi fortress in Nafplio)

In addition, they visited the famous archaeological site of Delphi and the mountain village of Arachova in central Greece. During this visit, they learned about the Oracle of Delphi and how the ancient Greeks considered Delphi to be the center of the world and marked the area with a stone monument, known as the Omphalos (navel). They enjoyed walking through the mountain village of Arachova taking picturesque photos of the amazing views with the Parnassus Mountain, one of the largest mountain regions in mainland Greece, in the background.

Prior to traveling to these sites, students received detailed lectures which helped provide a general understanding of the history behind the sites from Susie Michailidis, vice rector for Academic Affairs and professor of the Archaeology On-Site class. During the visits, a guided tour was provided so the students could enrich their knowledge of what they were witnessing.

“There is so much that I learned this semester that I would not have been made aware of if it weren’t for this class," said Webster criminology student Olivia Ellman. "I am grateful for the in-depth learning experience and the information that I learned. Overall, I do not think that my experience going to different excursions and archeological sites while I was here would have been as rewarding and valuable if I had not known that background that this class taught me.”

In Athens, they visited the Acropolis, the Roman and Ancient Agora, and Kalimarmaro/Panathinaico Olympic Stadium, where the first Olympic Games of modern times were held in 1896. In addition to the archaeological sites, they also visited several museums including the National Archaeological Museum and the museums of Ancient Olympia, Mycenae, and Delphi.

Also, with their Modern Greek Society and Culture class they visited the War Museum of Athens, the Benaki Museum, the Museum of Ancient Greek Technology: Kotsanas, and the Jewish and Byzantine museums.

“Visiting sites like Mycenae, Epidavros, Olympia, and Delphi made my experience learning about the history of ancient Greece and the significance of Archaeology more three dimensional," said Webster Biology student Abigail Tchiblakian. "Being able to stand in the place where historically significant events took place provided an irreplaceable aspect to my understanding and appreciation of this history. These trips also allowed us students to see more of Greece than we would've just staying in Athens. The countryside is beautiful and definitely something I'll never forget.”

To learn more about the program, visit  webster.edu.gr/studyabroad.

Webster University earned a GoAbroad Innovation Award on Friday, June 3, for the “Indigenous Rights and the Rights of Nature in Ecuador” study...