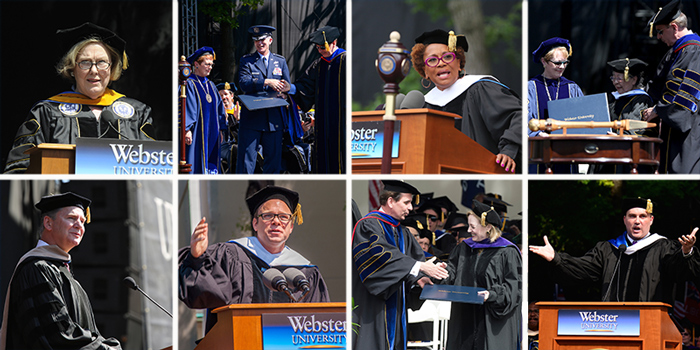 The Honorary Degree Committee is seeking nominations for the honorary degree recipient and commencement speaker for Webster University's 102nd commencement ceremony on Saturday, May 8, 2021.

This annual ceremony is the largest gathering of graduates and their families from Webster University campus locations throughout the world. Nominations must be submitted through the online form and will be accepted through Oct. 2, 2020.

An important part of commencement is the awarding of an honorary degree to a recipient who will be our commencement speaker. As in the past, we are seeking suggestions for this honor. Nominations will only be accepted through the online form.

The honorary doctorate degree recognizes academic accomplishments of individuals, including alumni, as well as those who may not have had any previous association with the University.

The Honorary Degree Committee seeks nominations of individuals who have excelled in one or more of the following areas:

Confidentiality is Crucial to the Nomination Process

Please note that all nominations must be confidential, without notice to the nominee, in order to protect privacy and respect the nominee. This applies until the process has concluded. Official notification of the University’s wish to confer an honorary degree upon an individual is made by the President on behalf of the Honorary Degree Advisory Committee and the Board of Trustees.

Self-nominations will not be considered.

Anyone Can Nominate the Speaker