ST. LOUIS - Five folders filled with original copies of correspondence between the Sisters of Loretto and hotel magnate Conrad Hilton that were written nearly six decades ago to solicit funds for the construction of the Webster University Loretto-Hilton Center were donated to the University on Dec. 3.

The papers were donated by Webster University Professor Emeritus Allen Carl Larson, who discovered them more than four decades ago when he was moving into his home as a new faculty member at Webster College, which later was renamed Webster University.

The three folders of documents were handed to Webster University Chancellor Elizabeth (Beth) J. Stroble at the conclusion of a lecture Larson delivered on the Webster Groves campus Tuesday morning about his find, which serves as the central theme of his new book “The Sister Backstage: A Story of Faith, Perseverance and the Loretto-Hilton Theatre.” The papers now part of the University’s archive in the Webster University Emerson Library.

“Through the publication of this significant correspondence, Professor Larson tells the story of how the Webster University Loretto-Hilton Center came to be,” Stroble said. “As a result, he helps us preserve our identity and further secures the legacy of the Sisters of Loretto and Conrad Hilton for Webster and all who benefit from the beauty and power of this performing arts center.”

Larson came across the letters by accident 46 years ago as he was starting his job as the new Webster College Orchestra director, he told Webster Today. “I was moving in and I asked a neighbor where to put my packing debris,” he said. “He pointed to a large pile of trash in his driveway and said to put it there for pick up the next day. On top of the pile, I saw five file folders with Conrad Hilton’s name on the tabs.” Larson asked permission to take them and the rest was history. The files were filled with letters and telegrams between Hilton, then-Webster College president Sister Francetta Barberis, and Sister Jacqueline Grennan, who later would become President of Webster College.

Larson would spend much of his career at Webster in the Loretto-Hilton Center as a music professor and orchestra conductor. He didn’t have time to write a book due to his busy schedule as a professor, but he never forgot the letters. Now retired, it wasn’t until this past January that he began writing the book, he told an audience of more than 50 people in the lobby of the Webster University Loretto-Hilton Center Tuesday morning.

Larson also shared his story on the “St. Louis on the Air” program on KWMU St. Louis Public Radio Tuesday afternoon. The full interview can be streamed online. 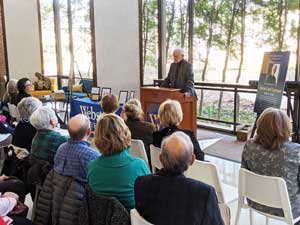 The letters are beautifully written, he said, and show that Barberis, Grennan and Hilton were well-versed in the power of strategic language. The letters reveal how the Sisters slowly encouraged Hilton to agree to have an arts center that carried his name, starting with small donations and culminating in his $1.5 million donation that funded most of the building costs.

The book does not contain all the letters or telegrams, but rather show copies of the correspondence that Larson believed were most significant. “I chose the letters that I believed helped move the story forward, so the reader could see how this campaign progressed over time,” Larson said Tuesday morning.

The book also explores the end result of that effort - a new performing arts center for St. Louis that spurred the creation of the Repertory Theatre of St. Louis and the Opera Theater of Saint Louis. Today, the Webster University Loretto-Hilton Center serves as home to both those nationally recognized institutions and serves as the primary venue for live dramatic and dance performances by Webster students as well as dozens of guest lectures and performances annually.

Larson will be at the Webster Groves Bookshop, 27 North Gore Ave, from 11 a.m. to 2 p.m. Saturday, Dec. 7 to sign copies of his book. All profits from the book are being donated to the Sr. Francetta Barberis Scholarship Fund.