ST. LOUIS - Webster University was named by the non-profit organization St. Louis Graduates as one of five Universities in Missouri and Southern Illinois that stand out for enrolling significant percentages of low-income students and Black students and supporting them to graduate with less debt. The reported data indicate that Webster has the highest percentage of Black undergraduate students, the highest graduation rate for Black students, and the highest graduation rate for Black Pell Grant recipients among the five schools named in the report.

The report, which can be downloaded online, also provided a series of recommendations to further reduce the overall cost of an education and make college more accessible to students in the region.

“Webster values the collaborative network of universities and schools convened by St. Louis Graduates as we together pursue the programs, policies, and leadership necessary to assure both access and success for the region’s students. Removing the barriers to persistence for low-income students and Black students requires continued commitment to Webster’s mission of meeting unmet needs and the joint effort of many faculty and staff,” said Chancellor Elizabeth (Beth) J. Stroble. “I am grateful for the Webster colleagues who are passionate about this work and continue to close equity gaps that are detrimental for students and their families and for our region and nation.”

The report - “Degrees with Less Debt: Postsecondary Strategies that Enhance Low-Income and Black Student Success” - was released during an online afternoon virtual video seminar Wednesday. The report listed and profiled the top five schools for supporting success for the specific students of the report’s focus. Besides Webster, the other schools named were McKendree University, Southeast Missouri State University, University of Central Missouri, and University of Missouri–St. Louis.  Webster University was also recognized for propelling students’ access and success in the St. Louis Graduates 2017 report.

Webster University had the highest percentage of Black undergraduate students - 16% - and the highest graduation rate for Black students - 44.5% - of the top five colleges. The study also found that Black students who received Pell Grants graduated at a rate of 60% at Webster, the highest rate for Black Pell recipients for the five institutions. The data used included federal data that recorded the percentage of students who are considered low-income and/or self-identify as Black, program completion rates for Pell Grant recipients, median graduation rates, and student debt at graduation. The authors of the study also conducted interviews with student focus groups from institutions, as well as with institutional leaders and staff members to gather more data.

“This is validation that Webster University is on the right track to addressing the need for more educational opportunities from a more diverse cross-section of our population,” said Webster University President Julian Z. Schuster. “It is well known that the St. Louis region needs to boost the number of college graduates in the region so that we can boost the economy and improve the community for everyone, and I’m glad that Webster is part of that solution.” 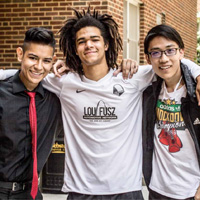 Among the recommendations cited in the report were the need for more need-based institutional aid, a more streamlined approach to the college financial aid process with financial literacy components built in, more leadership and advocacy for Black and low-income students across every institution, curriculum support, and more support for transfer students. Webster has instituted many initiatives in the past decade that address these needs. Among them are: 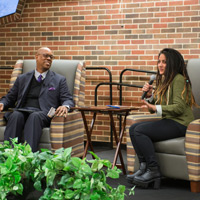 “Webster University has invested wisely in initiating measures and programs in an intentional way that directly and indirectly addresses their urgent needs,” said Webster University Chief Diversity Officer Vincent C. Flewellen. “Webster has worked toward strengthening diverse communities for decades and this recognition speaks to our commitment to more positive actions that provide pathways for the attainment and successful completion of a college degree for low-income and Black students. It is through no fault of their own, chief of which correlates to their social-economic upbringing, that they face tremendous barriers to attaining a college degree.”

According to the study, a college degree is still a wise investment. Earning a degree could boost the average annual income of a person by nearly $30,000 per year and cumulatively add $765,000 to a person’s overall income during a 40-year-career after deducting the initial costs of the college education and any associated college loans. The study also reports that college degrees are becoming a necessity for most jobs, citing research that said only one percent of the jobs created since 2008 went to people with a high school diploma, while 73 percent of the jobs created went to people with a bachelor’s degree or better.

Despite these benefits, the study notes that those benefitting the most from college degrees are people who identify as white who come from homes that make more than the average annual incoming in the U.S. The study said that in 2017, 22% of Black attained a bachelor’s degree or higher, whereas 37% of White adults attained this same benchmark, a gap of 15 percentage points. The gap is even greater according to the income in the family home those people grew up in - 62% of adults from families in the highest-income quartile had attained a bachelor’s degree or higher by age 24 in 2018 compared to just 16% who came from the from the lowest-income quartile.

This was the second such report from St. Louis Graduates, following up to a similar study released in 2017. St. Louis Graduates is a collaborative network of K-12 and higher education, youth serving non-profit organizations, business and philanthropy committed to eliminating equity gaps in postsecondary educational attainment for low-income students and Black students.