Webster Speaks Reflections: McCoy on planting a seed for change 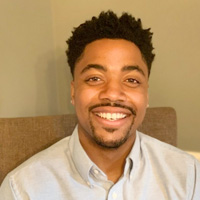 Earl A. McCoy, Jr. is Webster University’s Regional Recruitment Coordinator in the National Capitol Region (Washington D.C.). For the past six months of 2020, he also served as the announcer of Webster’s online series “Webster Speaks: Dialogues on RACE, EQUITY, and INCLUSION.” As the series concluded its 2020 run, he was asked to share his thoughts about what he learned from working on all 12 episodes.

The Webster Speaks team knows we cannot force someone to hear a message they are not ready to receive. But during the 12 episodes, many voices that often are not heard were shared, and collectively they built a platform that enables a seed of change to be planted.

To understand the entire scope of all of the conversations shared during the program, you must go back to early history, more than 400 years ago when the first slave ships arrived on the shores of North America. While the dialogue about equity for all men – not just those from Europe – started early, the most notable date is when the 13th Amendment of 1865 was passed to abolish slavery. Throughout human history, the idea of who or what is a noun has been highly debated. A noun is "used to identify any of a class of people, places, or things or name a particular one of these" by Google's definition. And today, in the 21st century, we find that the meaning of what nouns apply to people of color is still debated. That very concept is why Webster Speaks is so important today.

Comprehensively communicated throughout the series is that the past is a place of reference, not a place of residence.

This series is necessary due to the class distinction of the nouns used in American culture. A modern example can be found in 2013 with the killing of Trayvon Martin. America and Americans have this learned habit of identifying people through categories and enabling some to be higher or lower; and for too many Americans, it was far too easy to immediately cast Martin in the lower echelon, using nouns such as “thug” and “ganster,” even though none of those were applicable to the 14-year-old boy who walked to a corner store to buy candy.

That system also allows for hatred and fear of the unknown, and in some places, even gives legal protection for reacting to the unknown fear, casting those who fired the first shots without any objective reasoning as “heroes,” which is what happened for Martin’s killer in many communities in the “Land of the Free.”

Recently, though, that fear and hatred have begun to grow, fueled by the divisive language of the highest leaders of the land and shattering the fragile and slow progress America has made. This has allowed people who previously hid in the shadows to openly march in the streets under symbols of hate and division and to openly call for not just a regression of all progress made in the past century, but a complete elimination of civil rights and protections for those who look different. This is why Webster Speaks was born.

Webster Speaks began in July 2020 to engage the Webster community and the world with a paramount reminder that Black Lives Matter, and the fundamental principles of diversity, equity, and inclusion need to be comprehended.

In each of the 12 episodes, Webster Speaks discussed different real-world postulations in today's era. This series' creation is to install an accelerant of sustainable change for our viewers through the explication process. That process is known through the pain that hurts and alters our perception of the past, present and future.

Through the episodes, all of which can be found online, multiple fragments of the complete picture were discussed, everything from how older and younger generations interpret what is going on, to the power of art in activism. One episode was even devoted just to white guests who had started the journey of examining themselves and realizing the role they ultimately play in the equity movement.

Overall, what was comprehensively communicated throughout the series is that the past is a place of reference, not a place of residence. To repeat our past is to forget our present and continue the legacy of his-story rather than elevate our-story. Webster Speaks and the breath-taking guests, comments, and conversations continue the work of those whose voices can no longer be heard!

I cannot run away from my DNA (Diversity Needs Attention.) I found this in Webster Speaks: Dialogues on RACE, EQUITY, and INCLUSION because nothing gets better without action. And I hope that you, too, will take the time to watch the episodes and feel like your understanding has expanded.

Webster Speaks is just one element of Webster University’s continuing effort to create dialogues around inequity and justice issues. Join the community Feb. 23-25 for the sixth annual Webster University Diversity, Equity and Inclusion Conference, featuring regional and national speakers from numerous areas of interest. They include Charlotte Clymer, a military veteran, transgender activist and a former press secretary at the Human Rights Campaign, and Patrisse Cullors, an artist, activist, author and co-founder of Black Lives Matter. Next year’s conference will be online. Details will be listed soon at webster.edu.