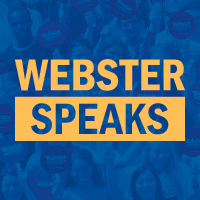 Chanting, blocking roadways, lying on the ground and shutting down public spaces – these forms of street activism set the 2014 Ferguson protests apart and created a new activist narrative. Three protesters who rose to prominence during that time appeared on Webster Speaks: Dialogues on RACE, EQUITY and INCLUSION on Sept. 29. They sat down with Vincent C. Flewellen, Webster’s chief diversity officer and the virtual talk show’s host, to discuss “The Power of Street Activism.”

Alisha Sonnier, president of the activist group Tribe X, became well-known for putting masking tape marked “I can’t breathe” on her mouth and for staging die-ins (similar to the Vietnam era lie-ins) in public spaces. The idea, she said, was to grab attention in innovative ways. It has been emulated many times since 2014.

“One of the best qualities of…what Ferguson had is the amount of heart and courage,” she said. “When people… talk about protests, they will look for people who were active in Ferguson, because to me, we just did direct action in a way that I don't know if other places are doing it to that level. Like there's nothing that was off limits: airports, churches, theaters malls, popular shopping areas.”

“When you're doing things like this, it's trial and error,” she said. “And so you see the success of your methods when you see other people …doing it, too, and to see how it works and see how other people will add their own creative twist to it. I think it's always a good thing.”

Watch a replay of the episode on YouTube here.

Alexis Templeton, co-founder of Millennial Activists United, was another panelist best known for her conviction on charges of assaulting a motorist on I-70 during a road blockade. Although leery of repercussions at first, she quickly embraced street activism. “It's important because people are going to pay attention. People are going to say things, people were going to talk,” she said. “There's going to be some conversation in some way, shape or form. There's going to be confrontation because it's brought to you.”

Tory Russell, Mission Director of The International Black Freedom Alliance, a global grassroots organization, has been most active in the protests surrounding Breonna Taylor. The Louisville, Ky. EMT was fatally shot by police during raid as she lay in bed.

“I had to leave St. Louis to show up for a Black woman,” said Russell, who is now back in the home but soon headed back to Louisville to protest. “It's sad that we didn't get justice… but we got plans to keep going and doing some more.”

Russell is a former founding member of the Black Lives Matter Policy and Strategy Team and an organizer of Ferguson October, which brought worldwide attention to police-involved shootings of African Americans. He has been named one of Ebony magazine's Power 100.

“I always felt like Ferguson was the equivalent of people that used to hoop outside and pick-up games, and one day you was in the NBA,” he said of the overnight fame Ferguson’s street activism bought its organizers. ”Just one day you was on every TV show and you was the leader of the movement.” St. Louis filmmaker Dan Parris created a 2016 documentary, “Show Me Democracy,” that followed key activists, including Templeton and Sonnier, in their quest for justice. Parris allowed Webster to include clips in the show.

Since Ferguson, Russell has devoted his life to combating racism on the front lines and training new activists. Templeton is headed to law school on a full scholarship as a result of her activism, and Sonnier is training to be a nurse practitioner who also embraces public speaking.

Those moments, she said, are the “wins” in the movement. “My win comes from me walking in my purpose. And my purpose is liberation,” Sonnier said. “I'm going to do that through healing, but I think we all have different ways of doing that. And that has to be our win.”

The session concluded with words of thanks from Webster President Julian Z. Schuster. “True philosophers change the world and I was delighted to be here tonight with three activists, three philosophers, three good individuals who care for the other people more than they care for themselves, but they certainly care for the world and the future generations,” he said. “The Webster door is always open for your ideas and to share them with our students, with our faculty, with our staff, with our members of our community.”

Live episodes of Webster Speaks are free and open to the public. Watch other past episodes and register for future ones at webster.edu/WebsterSpeaks.