The Community Music School of Webster University will welcome Mark Camphouse as Guest Composer for their 2021-2022 Young Composers Competition. The competition submission deadline is Oct. 22, 2021. The concert of winning works and featuring the work of Guest Composer Mark Camphouse is scheduled for March 26, 2022.

Since 2004, the Young Composers Competition (YCC) sponsored by Arden and Harry Fisher at the Community Music School of Webster University has recognized and encouraged the efforts of those between the ages of 12 and 21 who are involved in the creative process of composing music. This program, unique to the St. Louis region, is an open competition which has received submissions from St. Louis and throughout the world. Each year the guest composer plays an integral role within the YCC, providing developing composers with invaluable one-on-one guidance in a constructive and supportive environment from an individual already well established in their professional and creative field.

In addition to meeting with each winning young composer and reviewing their work, the guest composer engages intellectually with attendees via a public presentation on a musical topic relevant to their artistic pursuits and the professional development of the young composer. A work from the guest composer is also featured during the culminating concert of the YCC winning student works.

The choice of guest composer is based upon recommendations from the YCC committee, past participants of the competition, and a general keeping of ears to the ground for exciting new voices in the new music world. "Through the YCC, we strive to engage guest composers who are active in both the creation of exciting new work and the education and guidance of young minds. Additionally, we look for those who hail from backgrounds not traditionally so well represented in the composition world. There are so many brilliantly diverse voices singing their unique perspectives and it is paramount that we share that with the promising young musicians we host," says Justin Blackburn, coordinator of the Young Composers Competition.

Entries are currently being accepted for the 2021-2022 Young Composers Competition. Interested composers should visit www.webster.edu/cms-ycc for more information. The deadline for submissions is Oct. 22, 2021 and winners are announced no later than Jan. 7, 2022. 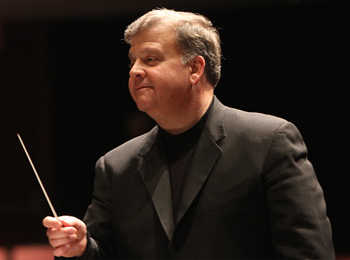 A product of the rich cultural environment of Chicago, composer-conductor Mark Camphouse was born in Oak Park, Illinois, in 1954. He received undergraduate and graduate degrees in music from Northwestern University where he studied composition with the Alan Stout, conducting with John P. Paynter, and trumpet with Vincent Cichowicz. A scholarship from the Civic Orchestra of Chicago enabled Camphouse to study trumpet privately for two years with legendary Chicago Symphony Orchestra principal trumpet, Adolph Herseth.

Camphouse has served as guest conductor, lecturer, and clinician in 43 states, Canada, Europe, and China. He was elected to membership in the American Bandmasters Association in 1999 and has served as founding coordinator of the National Band Association Young Composer Mentor Project since 2000. He conceived and edited the unique 4-volume book series for GIA Publications, Composers on Composing for Band. His 5th book with GIA Publications (Whatsoever Things … The Life and Teachings of John P. Paynter) was published in 2014.

The 2021-2022 academic year marks his 44th year of full-time teaching in higher education. In 2006, Professor Camphouse joined the faculty of George Mason University (Fairfax, Virginia) where he serves as Director of Concert Bands, conductor of the wind symphony, and teaches undergraduate and graduate courses in composition, conducting, and orchestration. Other principal artistic, teaching, and administrative positions have included serving as Music Director and Conductor of the New Mexico Music Festival at Taos Symphony Orchestra, Associate Director and Music Division Head of the Virginia Governor’s School for the Arts, Acting Dean of Music of New World School for the Arts in Miami, and Interim Director of the George Mason University School of Music.

Professor Camphouse attained regional finalist status in the prestigious White House Fellowship Competition in 1993. In 2002, he received an Outstanding Faculty Award sponsored by the State Council of Higher Education for Virginia, the Commonwealth’s highest honor for faculty at Virginia’s colleges and universities for demonstrated excellence in teaching, research, and public service.

In 2011, Camphouse received the Kappa Kappa Psi Distinguished Service to Music Award in recognition of and appreciation for valuable contributions to the growth and development of the modern college/university band in the field of composition. In 2015, Camphouse received the Outstanding Contributor to Music Award from Phi Beta Mu International Bandmasters Fraternity. Mark Camphouse has been married to Elizabeth Ann Curtis (Executive Director of the Mason Community Arts Academy) since 1982. They have twin daughters, Beth and Briton.

The Community Music School of Webster University will welcome Mark Camphouse as Guest Composer for their 2021-2022 Young Composers Competition. The...

The Community Music School has partnered with Classic 107.3 for the CMS Preparatory Program Scholarship Competition. Students applying for the 2021-2022...