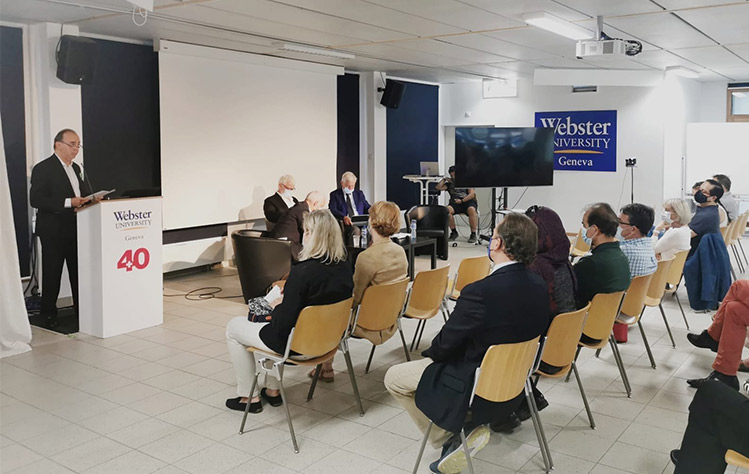 On Tuesday, Sept. 14, the International Relations Department at Webster University Geneva organized a panel discussion on the consequences and legacy of the tragic events of Sept. 11, 2001, the “War on Terror,” and the situation in Afghanistan, especially in view of recent developments in that country, with the sudden collapse of the Ashraf Ghani government and the Taliban regaining power in Kabul on Aug. 15.

Panelists included Lieutenant-General Giorgio Battisti of the Italian army, who had four tours of duty in Afghanistan between 2001 and 2014; veteran, Swiss-American journalist Edward Girardet, who has covered Afghanistan on the ground since the 1970s and is author of several books on the country and other war zones; and Ambassador Michel Veuthey, who served as an International Committee of the Red Cross delegate for over three decades and currently teaches at the University of Nice and Webster University.

The panel was moderated by Jubin Goodarzi, associate professor and deputy head of the International Relations Department at Webster’s Geneva campus.

A summary of the panelists' remarks in this thought-provoking discussion follows:

Gen. Battisti stated that at the height of the war against the Taliban in Afghanistan, the international coalition had over 130,000 troops on the ground. However, aside from the Americans, British, French and Italians, the other contingents from the 51 countries did not participate in major combat operations. Furthermore, they had different policies and strategies in carrying out their mission, resulting in a lack of coordination. He went on to explain that some of the contingents did not engage with the Afghan people, and there was an absence of genuine nation-building in the country.

Battisti underscored that Afghan soldiers and security forces were brave and fought hard against the Taliban insurgency. However, the top ranks of the military and the government were riddled with corruption and mismanagement, which undermined the efforts of the soldiers on the ground and the credibility of the Afghan government in the eyes of the Afghan people. Between 2009 and 2021, the Afghan government forces lost over 70,000 men in the fighting.

He pointed out two critical issues for the international coalition. First, the shif of focus away from Afghanistan and the transfer of U.S. troops by the Bush administration in 2002 in preparation for the invasion of Iraq in 2003; and second, the Obama administration’s declaration after the 2009 surge and deployment of some 30,000 American troops in Afghanistan that it would begin to draw down its forces by 2012. The Taliban therefore laid low and avoided confrontations with U.S. forces, waiting for their eventual departure. Afterwards, they resumed their armed campaign against the government.

Gen. Battisti said that from 2009 onward, the Afghan government forces fought on their own against the Taliban although they received air support from the U.S. and its allies. The morale of the Afghan soldiers gradually diminished and collapsed after the Trump administration concluded a bilateral agreement with the Taliban in Doha, Qatar, that paved the way for the withdrawal of all U.S. forces by 2021. The Afghans felt that Washington had sold them out. The collapse of the Afghan government in August was swift, and the Taliban have again taken over after two decades. In conclusion, Battisti posited that the failure of the West in Afghanistan marks the end of humanitarian intervention.

Edward Girardet focused on the issue of responsibility for the Afghan fiasco. He said it was no surprise that the Taliban took over; only the speed of their victory in August astounded everyone. Girardet asserted that the Taliban have always enjoyed the support of Pakistan, in the 1990s, on the eve of 9/11 and at present. He pointed out that the West did not heed the warnings of the Afghan opposition leaders not to invade Afghanistan since there was no military solution to the country’s conflict.

Furthermore, contrary to their advice, the West incorrectly assumed that by expending enormous financial resources within a short time and establishing a centralized government the situation could be remedied.

Girardet also believes that the strategy of involving Western soldiers in development initiatives such as the establishment of the Provincial Reconstruction Teams (PRTs) was flawed. Afghan civilians would not engage in frank and open discussions with armed foreign troops. He argued that U.S. mistakes in Afghanistan trace back to 1979 following the Communist coup prior to the Soviet invasion, suggesting the U.S. made a colossal mistake by backing the most violent, extremist Afghan mujahedin groups in that war. This came back to haunt the West with the emergence of the Taliban and Afghanistan serving as a safe haven for terrorists.

Girardet highlighted that corruption was not only prevalent among Afghan government institutions but also Western companies and entities that operated in the country. He concurred with Battisti that Trump sold out Afghanistan by concluding an agreement with the Taliban. He concluded by saying that the West will pay for these mistakes and there is a strong probability that Afghanistan will be plunged again into a civil war.

Ambassador Veuthey asserted that as a humanitarian, he believes there is an urgent need to rebuild international cooperation and restore international law to its proper place. He said Bush administration’s policies demonstrated contempt for international laws and conventions by justifying torture and ill-treatment of prisoners, and waging “preventive” wars against Iraq based on unsubstantiated claims.

He further argued that the so-called “War on Terror” has been extremely damaging and detrimental. Bush's successor Barack Obama did not take decisive steps to discontinue many of these harmful policies.

Ambassador Veuthey argued for the need to talk to the other side. He explained how the ICRC succeeded in 1982, during the Soviet-Afghan conflict, to work out an arrangement between the two warring parties to have prisoners protected and released. However, during the two decades of U.S. and Western involvement in Afghanistan, no comparable agreement involving the combatants was ever achieved.

Still, in spite of recent developments, Veuthey thought that 2021 could still be a year of opportunities. He urged that the various stakeholders inside and outside Afghanistan need to be engaged; the “War on Terror” must be brought to an end; the international community should contemplate a Marshall Plan for Afghanistan; and finally, an international conference on security and cooperation to discuss economic, social and humanitarian issues in Afghanistan should be convened. He recalled the recent statement by UN Secretary-General Antonio Guterres that the de facto authorities in Afghanistan, the Taliban, need to be engaged.

Overall, the presentations and analyses, and the discussions, questions and answers which followed proved to be extremely illuminating and provided the audience with a great deal of food for thought and reflection. This event was the first organized by the International Relations Department at Webster University’s Geneva campus for the 2021-22 academic year. More timely events and deep discussions of important global and regional issues will be organized in the coming weeks and months.

Morgan Grotewiel is quoted in an article, "Test Anxiety: Symptoms, Causes, & How to Cope," for the online publication Choosing Therapy. ... Kim...