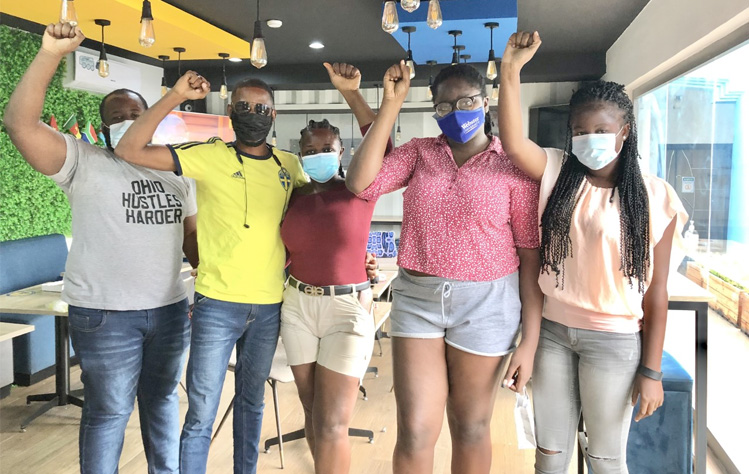 With diversity and inclusion one of Webster's core values, and as the only Webster campus located in Africa, Webster Ghana is directly impacted by the history of slavery and colonization given the tragic past of the West African Trans-Atlantic slave trade.

This year the Ghana campus commemorated Juneteenth with a screening of the trending Netflix documentary series, “High on the Hog,” followed by a passionate virtual discussion of the Juneteenth episode of the series with one of the campus’ esteemed faculty members, Brenda McGadney.

“High on the Hog,” which is based on the book, “High on the Hog, A Culinary Journey from Africa to America,” written by Jessica Harris, is a documentary series that connects the culinary experiences of the African and American continents. Although the story of African cuisine in America begins with slavery, “High on the Hog” narrates an exciting history of triumph and survival.

McGadney, a Webster Ghana visiting faculty member, led the discussion via Zoom and began with excitement by first announcing the passing of a new bill by the U.S. Congress on June 16, 2021, officially making Juneteenth a federal holiday in the United States. She proceeded to highlight three very important events leading to the origination of Juneteenth -- the Emancipation Proclamation established by Abraham Lincoln in 1962, the 13th Amendment to the constitution of the United States and the General Order Number 3, indicating that although slavery had ended in other parts of the United States, there were many slaves in the state of Texas who were not yet aware.

Students were then invited to share their thoughts on the episode and on Juneteenth. Some shared that it was a great opportunity for Black people all over the world to unite and celebrate how far we have come as a people. They also shared that there were legitimate reasons for Juneteenth to be celebrated everywhere on the African continent aside from in the United States, as most former slaves in the United States were captured and taken away from the African continent.

McGadney strongly agreed with these comments and shared that Juneteenth was more of a Texas state holiday and other parts of the United States did not have much knowledge of it until recently. She emphasized the importance of teaching African history in schools, but commended that thanks to the internet and social media, more awareness is being created. She encouraged students to try their best to learn a little bit about where people they meet are coming from and try to understand their history just as she does whenever she visits other countries, and she added that it was okay to make mistakes if we can learn from them.

The discussion ended with a mini feast of some African-American dishes like sweet potato pie and cornbread as well as a local Ghanaian dish waakye, made from rice and beans -- two popular ingredients in African-American cuisine. McGadney also treated the students to some Ghana-made chocolate at the end of discussion. It was the campus’ second celebration of Juneteenth. It was a passionate and exciting event, and a great opportunity for our students to have more discussions on Black history.

Webster Ghana Has a Busy End-of-Semester

Webster Ghana hosted two fairs and an job fair during the last weeks of the Spring 2022 semester.