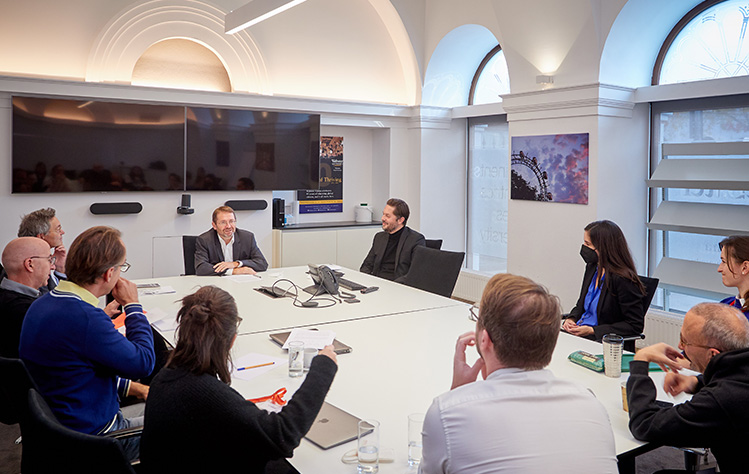 This order had been increasingly under strain in recent years. Contrary to the expectations some three decades ago, processes of globalization have not led to a global spread and strengthening of the liberal international order. Instead, we got a patchwork of developments that point in various directions.

In his opening remarks, Prof. Johannes Pollak, rector of Webster Vienna Private University, emphasized the growing tension between the realist world of power and the liberal international order limiting the exercise of power. Key questions emerging out of this tension are to what extent can liberal democracies maintain their ability to defend the truth and under what conditions is there consent to the principles of the liberal international order.

Prof. Iver Neumann elaborated on how the rationality of governance through liberal international practices in diplomacy and other related fields or “governmentality” has been systematically challenging the concept of sovereignty. As a result, there has been a backlash resulting in a tug of war between ‘sovereignism’ represented by the likes of Donald Trump and Boris Johnson and the proponents of the liberal international order. 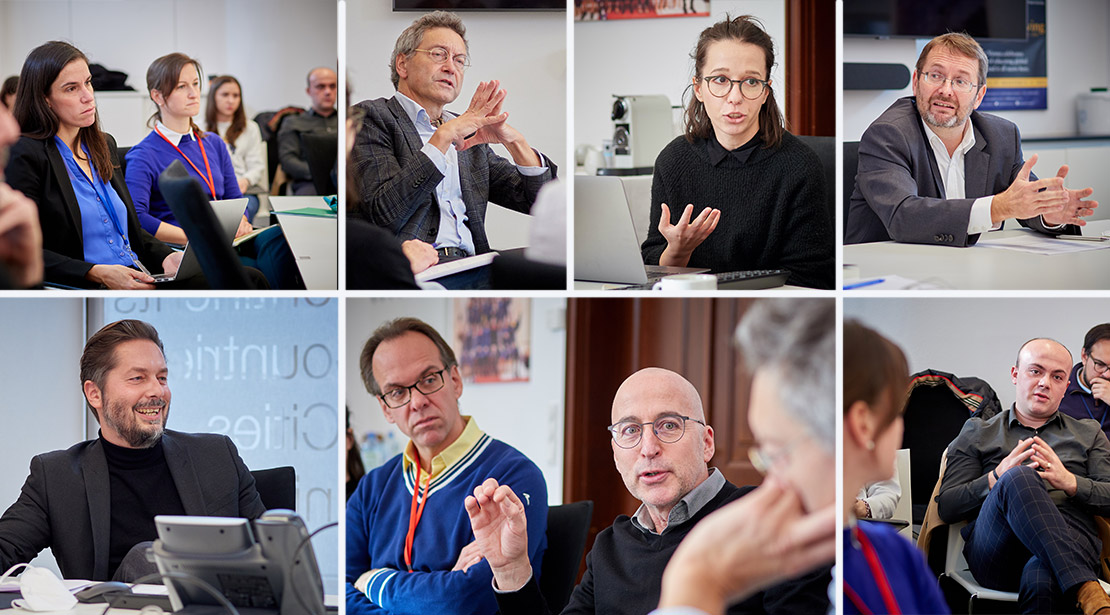 Using a genealogical perspective, Monika Kubová – a PhD candidate at CEU – explored the medieval origins of the concept of neutrality as a founding principle of political order and discussed what can be learned from earlier historical periods in our thinking about processes of how political orders get constituted.

Prof. Markus Kornprobst, chair of international relations at the Diplomatic Academy Vienna, further elaborated upon this question introducing a new conceptualization of "ordering" in international relations. This included multiple layers of old and new orders as well as interconnections between parallel functional orders.

Bátora focused on the European External Action Service – the EU’s multi-functional diplomatic service -- and private military companies -- operating in the intersection between the private market and the sphere of core governmental functions. He further discussed how processes of recombination and transposition of practices within such ‘interstitial organizations’ lead to endogenous dynamics of change in core institutions of the liberal international order.

In the final paper on the first day, Dr. Anatoly Reshetnikov introduced his latest research on the role of translators in international diplomatic negotiations exploring their multiple functions as "gatekeepers of national traditions," intercultural censors, and "subtle political editors." With this analytical focus, he brought to the discussion an often-overlooked set of mechanisms keeping international order up and running. 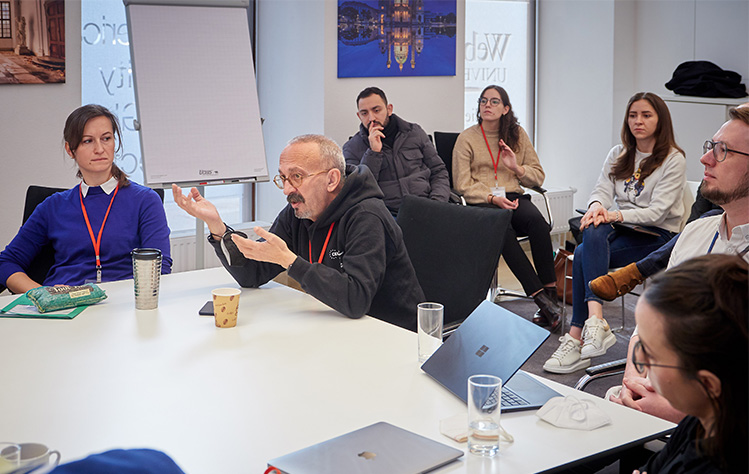 On the second day of the workshop, Neumann presented his research on how "governmentality" practices -- related to involvement of non-state actors and systematic involvement in internal affairs of third countries through conflict mediation -- transform diplomatic administrations in small and medium Western powers. Foreign ministries internalize such practices which potentially challenges – or possibly enhances -- their traditional role as the guardians of state sovereignty.

Dorit Geva, professor and founding dean undergraduate studies at the Central European University, then shifted the focus of the debate on the growing trend towards introduction of new nationalist socialization standards at universities by illiberal governments in Europe, most notably Hungary. Detailing the processes and practices related to the setting up of Ludovika – University of Public Service in Budapest, she argued that Orbanism is different from Trumpism. The former is based on an ideological project seeking to transform the EU (and the LIO more broadly) from the inside by infusing the Hungarian public service with a nationalist identitarian approach to policy making.

Anna Höfler – PhD candidate at the University of Innsbruck – then introduced her analytical perspective for studying the role of great power responsibility through the prism of recognition. Recognition as a relational process is namely of key importance for the inclusion and maintenance of liberal norms as a constitutive element for the concepts of greatness in today’s world featuring illiberal powers in increasingly prominent positions.

Focusing on one such power – China – and its relations with the European Union, Dr. Franco Algieri discussed to what extent China can operate as a responsible stakeholder. As he elaborated, the LIO is also constituted by discourses about it and China has been promoting alternative discourses of order – partly with the help of Western educated intellectuals (e.g. ideas about the “Asian way” of organizing politics and governance).

In a final contribution to the workshop, Alexander Astrov, associate professor of IR at Central European University, presented his analytical approach to analyzing Russia’s role as a “minor power.” Building on structuralist literary theory and pointing to Franz Kafka as an author using a dominant language in his writings but “using it differently”, he argued that Russia’s relation to the liberal international order can be analyzed in an analogical way – as partially inside and partially performing practices that make it an outsider. 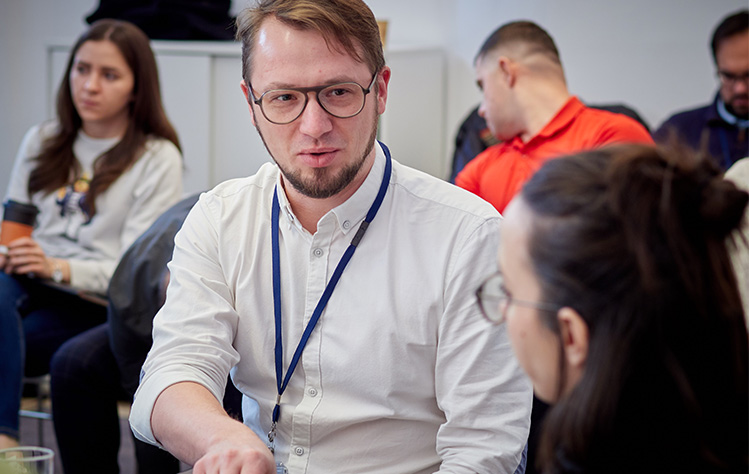 Over two days, a vital component of the workshop was extensive discussions and debates in the group involving graduate students and International Relations scholars.

As Webster Vienna’s International Relations graduate student, Franc Shkembi, pointed out: "Being a member of the International Relations epistemic community requires a certain mix of expertisein areas such as anthropology, macro-sociology, diplomacy, political science, political philosophy, sinology, etc. All these expertise areas were represented in the list of speakers during the Workshop. The opportunity to discuss global developments with some of the authors of our reading materials is indeed a highly pleasant intellectual experience, but also something joyful for a student."

He concluded by noting that these kinds of events "really are something meaningful for the students of Webster Vienna. This is why and how Webster Vienna education stands out, by creating a unique nexus between material capabilities and soft skills. I am personally deeply proud of the educational choices that I have made and feel extremely thankful and indebted to the team of my professors at Webster Vienna Private University for creating opportunities for in-depth academic reflection and networking such as this one."

Webster Vienna Private University fulfills its Humboldtian mission of connecting education with cutting-edge academic research. In addition to the fruitful educational exchanges and learning, such socialization is an added value for students.

Such personal encounters in small-group settings remain crucial in an era of the growing dominance of webinars and other web-based communication. They offer a unique university experience in Vienna – a city in the heart of Europe right at the pulse of global affairs.

Get Out of That Bubble! Study in Europe and Discover the World at Webster Vienna

Studying in a foreign country is a unique opportunity to live and learn in an international environment. A city like Vienna has much to offer students,...