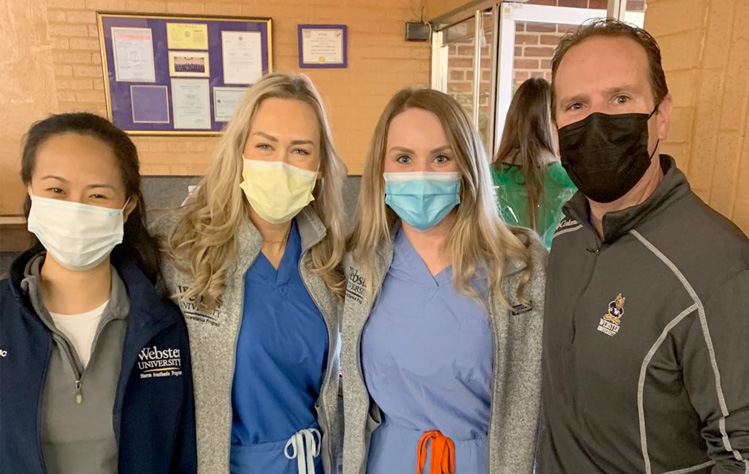 Students and faculty from Webster University’s Nursing Department are helping lead the charge in vaccinating as many people as possible from COVID-19. They have been taking turns volunteering with health departments in the region to distribute vaccines to those in need.

Jody Spiess, assistant professor of Nursing and the RN to BSN coordinator, said that she and her students became involved with the vaccination effort through her connections to the St. Louis County and City Health Departments. She used to work for the County Health Department and has a friend who works for the City Health Department. “I remained in contact with both health departments, and they call me when they have a need, and we try to help them,” she said.

One of the first people I vaccinated was an elderly man who didn’t have any family, and he said, ‘you're the first person I've sat and talked to in a year.'

Jill Stulce, department chair of the Nurse Anesthesia program said that her department got involved through another connection. “Dr. Michael Burns helped facilitate getting everybody vaccinated in the Phelps County area and wanted to share the opportunity for students to participate as well,” she said. “So, he reached out and asked what was necessary to get the students involved so that they could help expedite getting the vaccine to as many people as possible.”

Spiess said that Saturday, Feb. 27 was the first mass vaccination event Webster was invited to. Originally, she thought that no one from Webster would be able to help because the clinic was announced with little time to prepare. Then she saw a photo posted on Twitter thanking Washington University, St. Louis University (SLU), and Webster University for helping and recognized several Webster students and faculty in the photo.

“When I saw that I'm like, ‘wait a minute, Webster was there!’ and I was so excited to see it,” she said. “It's a big deal that people are volunteering their time, who are busy, and have other things to do, but they're doing it because it's the right thing.”

It's not about the BSN and MSN students going to practice their vaccination and intramuscular injection skills. It's about them helping to end this pandemic, partnering with community members, and truly making a difference.

The March 6 event didn’t have any students at it, but several faculty members showed up, including her. “What I found so cool was I ended up sitting at a table with a SLU nursing student. I thought, ‘this is the way it's supposed to be. Competing facilities working together, because that [competition] doesn't matter right now,’” Spiess said. “We are here for the health of the community.”

Spiess said that volunteering was exciting and invigorating, but also sad at the same time. “One of the first people I vaccinated was an elderly man who didn’t have any family, and he said, ‘You're the first person I've sat and talked to in a year. It's not like I would have family over anyway, but I can't even go to the movies and that's where I usually would see and talk to the people at the snack bar and things like that,’” she said. 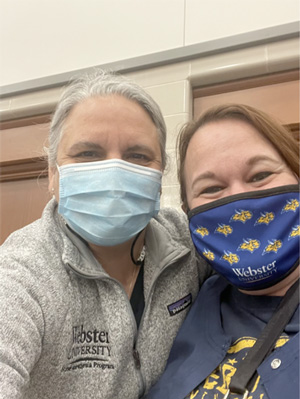 “And from that person on, when they would come in, I would say, ‘I am so proud of you for coming in today. How's your year been?’ I tried to talk to them a little bit. Yes, we're trying to get them through and we're trying to get them vaccinated, but some of them are so lonely. Every single person who I vaccinated whether they were afraid of needles or not were so thankful for the vaccine, but also, I think, just to see and interact with people.”

“My students never cease to amaze me. As demanding as this program is, whenever it comes to these philanthropic types of notions, they are all just reinvigorated on the front end,” Stulce said. “When this all happened, last March, many of them flew to New York right away, and worked 12-hour shifts every day in the units up there. They just felt a moral obligation to it. So, anytime something like this presents itself, it doesn't matter what the demands of the program are, they rise to the occasion.

“So, this is part of their fiber. On their spring breaks, they go on mission trips to Honduras and other such places. I love the generation and this sort of philanthropic, give-back to the community, and their talents and treasures. They're all in. Nursing rears good people.”

Spiess said that her students, since they will be in their public health nursing course, their volunteer hours will count as practice experience hours. “I'll oversee the scheduling at first, but eventually they'll be scheduling around their work hours, since they already have nursing licenses and work different days and shifts.”

Stulce said that the vaccination volunteer effort is giving Webster’ nursing program fame in a way. “This whole situation may have been unpredictable, but hopefully it reaches out to the people and shows the caring, giving, philanthropic, more spiritual side of who we are.”

Spiess said that it is getting her program’s name out there. “A lot of times people don't know that we have a BSN/MSN program, so I'm thankful that this just gets our name out there a little bit.”

She continued, “I think it's a great opportunity for students, especially who are already nurses. It's so important for nurses to be involved, and I think the one of the most important things for me is that people realize that you can't be too qualified to do vaccinations. It's not about the BSN and MSN students going to practice their vaccination and intramuscular injection skills. It's about them helping to end this pandemic, partnering with community members, and truly making a difference.” For more information about the Nurse Anesthesia or Nursing programs, visit the College of Arts & Sciences site.

Vaccine Clinics to be Held on Main Campus in April, Sign-Up Required

The University is connecting main campus community members with the COVID-19 vaccine, holding vaccination clinics at the Webster Groves campus for...