This year marks the 20th anniversary of the terrorist attacks on the World Trade Center in New York City, The Pentagon in Arlington County, Virginia, and the crash of Flight 93 outside of Shanksville, Pennsylvania, on Sept. 11.

Officially, 2,996 people were killed in the attacks. Four of those lives lost included three Webster University alumni and one student, all in the crash at The Pentagon, the headquarters building of the U.S. Department of Defense. 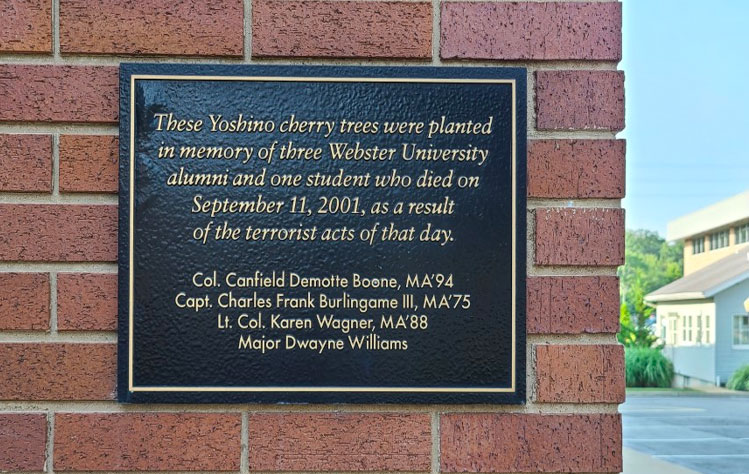 Col. Canfield Boone earned his master’s degree in Personnel Management from Webster University in 1994. He served in a wide array of both Command and Staff Assignments throughout his 31 years of service in the National Guard. At The Pentagon, he was assigned to the Deputy Chief of Staff for Personnel, Army. Boone’s numerous awards and decorations include the Legion of Merit, the Purple Heart, the Meritorious Service Medal (one Oak Leaf Cluster), the Army Commendation Medal (three Oak Leaf Clusters). He was killed when Flight 77 crashed, leaving behind a wife, three sons, two sisters and his mother.

Capt. Charles Burlingame III earned a master’s degree from Webster in 1975. A Vietnam Vet, he specialized as a pilot of F-4 Phantoms and was a graduate of the U.S. Naval Academy and the Navy “Top Gun” school NAS Miramar. He retired after 22 years in the service in 1979 and became a pilot for American Airlines. He also worked for the Naval Reserve, retiring at the rank of captain in 1996. He was recalled to active duty during the first Gulf War and was awarded the Defense Superior Service Medal. He was the pilot of Flight 77 before it was hijacked. Burlingame had planned to attend a 30th reunion celebration for graduates from the U.S. Naval Academy that was scheduled for the week after Sept. 11. He left behind a wife, daughter and grandchild.

Lt. Col. Karen Wagner earned a master’s in Health Services Administration from Webster's Fort Sam Houston campus location in 1988. During her 17 years in the service, she spent most of her career assigned to U.S. Army hospitals or with Medical Battalions. Just one month before she died, she had been promoted to the position of medical personnel officer in the Office of the Army Surgeon General and Deputy Chief of Staff for Personnel in The Pentagon. According to her sister, she was thinking of retiring from the U.S. Army to pursue a career as a teacher in Texas before she was killed in the attack.

Maj. Dwayne Williams was pursuing a master’s degree at Webster University. He had just graduated from the Army Command and General Staff College in June 2001, and was assigned to the Office of the Deputy Chief of Staff for Personnel in The Pentagon as the Joint Officer Distribution Manager, serving under the Director for Military Personnel Management. In each of his assignments, Williams served with distinction, professionalism and pride. He died when Flight 77 crashed, leaving behind a wife, a son and a daughter.

In the aftermath of the attacks, Robert Tanner, a counseling and psychiatry professor at Webster’s Albuquerque campus location, flew to the site of the World Trade Center in New York as a member of the American Red Cross Disaster Mental Health Team. He would spend two weeks at the site, working 10 hours a day escorting family members of victims to the site of the disaster and offering them grief counseling and advice on how to recover. About the experience, he would later tell Webster colleagues, “I could see physical change in these people – some even fainting – when they realized there really was no hope in finding their loved ones.”

Tanner left Webster University when the Albuquerque location was closed in 2016. He currently is listed as a part-time instructor for the Central New Mexico Community College.

In September 2001, the Parking Garage on Webster University’s main campus in Webster Groves was under construction. After the building was completed, a memorial plaque with the names of the alumni and student lost in the attacks on 9-11 was affixed on the garage's stairwell, next to the entrance near the University Bookstore entrance, with mention of the two cherry trees also planted nearby in their memory. 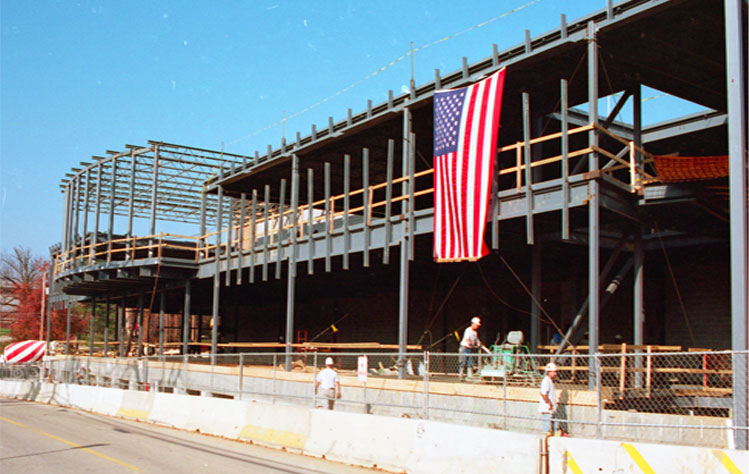 Also under construction at that time was the expansion of the Loretto-Hilton Center for the performing Arts. As seen in the above photo, construction crews affixed an oversized American flag to the unfinished structure in the weeks after the attacks.