'How Democracies Die' Co-Author to Speak to Webster Class 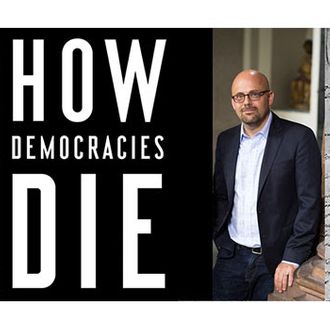 Daniel Ziblatt, co-author of the best-selling book “How Democracies Die” and professor of political science at Harvard University, will be a guest speaker in the Overview class in the Department of History, Politics, International Relations and Religious Studies.

Ziblatt’s webinar will happen at 9:15 a.m. CST on Saturday, Feb. 13. All students, faculty and staff at Webster University are invited to the Zoom presentation. The event is sponsored by the Department and by the Faculty Speakers Series.

“Daniel Ziblatt is a compelling author and speaker who challenges his readers to understand the history of democracy,” said Professor emeritus Dan Hellinger, who is teaching the Overview course for seniors this year. “The phrase democracy gets thrown around quite a bit by politicians and the media, but many people who think they understand it don’t realize what a fragile system it can be and the underlying assumptions that are needed in order to make liberal democracy work.”

The Overview course focuses on one book each year and selected “How Democracies Die” for the spring term. After Ziblatt’s remarks, students will have the chance to pose questions and comments.

“How Democracies Die” was written by Ziblatt and Harvard Professor Steven Levitsky. Published by Crown books of New York in 2018, it became an immediate international best seller, making the New York Times best seller list for several weeks and being named by former President Barack Obama as his favorite book of the year in 2018. The book still is listed in the top 100 books in Amazon’s Administrative Law, Religion and Democracy sections. It has been translated into several languages.

In the book, Ziblatt and Levitsky examine the history of several countries that had democratically-elected governments gradually turned into authoritarian regimes through executive actions, court rulings and new laws. The authors examine well-known historical cases, such as the rise of fascism before World War II, as well as examples of democracies that they say have slid toward authoritarianism  such as Georgia, Hungary, Nicaragua, Peru, the Philippines, Poland, Russia, Sri Lanka, Turkey, the Ukraine, and Venezuela.

The authors identify patterns that explain how a democracy could be dismantled without civil war, a coupe or military intervention from another country. “Democracies may die at the hands not of generals but of elected leaders,” they say. Examples of behavior identified include politicians labeling opponents criminals and calling for their immediate arrest and prosecution; stacking the court system with judges who were favorable to the executive branch; criticizing the media and labeling reporters illegitimate; encouraging followers to commit acts of violence against critics; and rejecting past norms of behavior such as the peaceful transfers of power. The authors contend that those same democratic-dismantling behaviors are being exhibited by U.S. politicians and conclude that the United States is at risk of losing its democratic values.

Ziblatt is the Eaton Professor of Government at Harvard University and is director of the Transformations of Democracy group at the WZB Berlin Social Science Center. He specializes in the study of Europe and the history of democracy.

Besides “How Democracies Die,” Ziblatt is the author of “Conservative Parties and the Birth of Democracy” and “Structuring the State: The Formation of Italy and Germany and the Puzzle of Federalism.” Ziblatt also has written several articles in Vox Magazine and the New York Times and other publications. Besides teaching at Harvard he has been a fellow or visiting professor at the European University Institute in Florence, Italy; the Center for Advances Study at Stanford University in Palo Alto, California; the Max Planck Institute in Cologne, Germany; the University of Munich in Germany; and the Ecole Normale Superieure in Paris, France.

The event is free, but registration is required. Register via Zoom here and a link to the event will be emailed to participants. Students in Hellinger’s class and faculty members in Webster University’s Department of History, Politics, International Relations and Religion will ask questions first before, time permitting, addressing questions submitted by the general audience.

Nicole Oribhabor, Esq., a high-profile defense attorney and activist in the Boston, USA, community engaged with Webster Leiden students in the advanced...