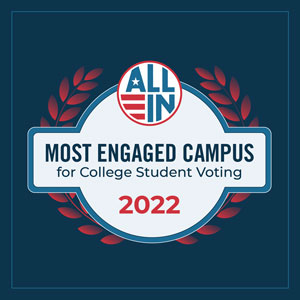 Webster was among the 394 colleges and universities recognized this year for completing these four actions:

"Participation in the democratic process through learning about and participation in election is one of the greatest lessons we can teach our students about being global citizens. Recent elections have demonstrated the importance of casting your ballot because every vote truly counts,” said Jennifer Stewart, director of Webster’s Office of Student Engagement. “Through active participation in WebsterVOTES events and consistent engagement around these topics, Webster University students show why we are deserving of this recognition as a '2022 All In Most Engaged Campus for College Voting.'"

Webster’s democratic action plan was drafted in the spring of this year. A final draft will be submitted in December. Earlier this month, Webster University President Julian Z. Schuster signed the Higher Education President’s Commitment to Full Student Voter Participation.

“College student voter turnout has increased since 2016, and this increase has been driven by students. The ALL IN Campus Democracy Challenge is excited to expand our ALL IN Student Voting Honor Roll to recognize these student voting champions across the country,” said Jennifer Domagal-Goldman, executive director of the ALL IN Campus Democracy Challenge. “These students registered voters, served on their campus voting coalitions, spearheaded voter education efforts, advocated for campus polling locations and organized other voter engagement efforts to ensure their peers were confident and informed voters.”

ABOUT ALL IN Campus Democracy Challenge

Webster University has been recognized by the ALL IN Campus Democracy Challenge as a 2022 ALL IN Most Engaged Campuses for College Student Voting,...

The Office of Academic Affairs is pleased to announce the creation of a new Division of Student Success which will be led by Kyle McCool.