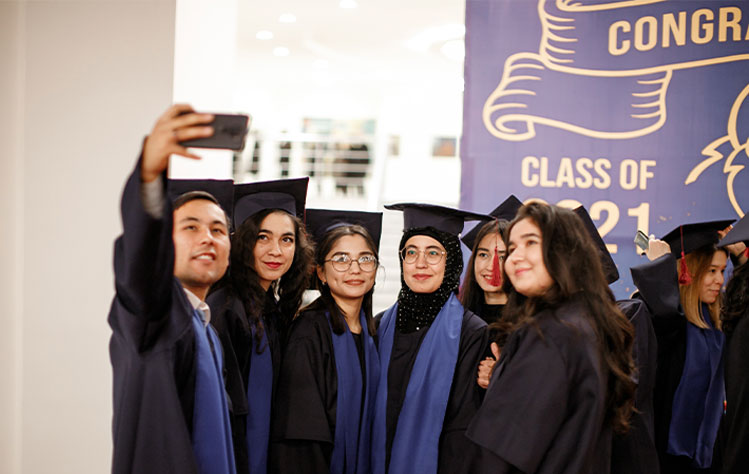 Webster University in Tashkent held its commencement ceremony for the master’s class of 2021 on Nov. 20 at the Alisher Navoi Panorama Cinema, site of red carpets and film festivals. One of the masterpieces of Soviet modernist architecture, the cinema was chosen for its location and capacity to hold nearly 200 graduates, plus guests and faculty.

Those honored at the ceremony are alumni of the Master of Arts in teaching English as a second language program. Of 191 graduates, around 170 attended the ceremony in Tashkent, with some traveling from other regions of Uzbekistan to walk across the stage and watch their classmates do the same.

The ceremony opened with video messages from Chancellor Beth Stroble and President Julian Schuster, followed by video messages from School of Education faculty members Michael Hulsizer, acting dean, and DJ Kaiser, associate dean. Although these words of congratulations were spoken from a distance, the graduates were visibly appreciative and excited to receive them. 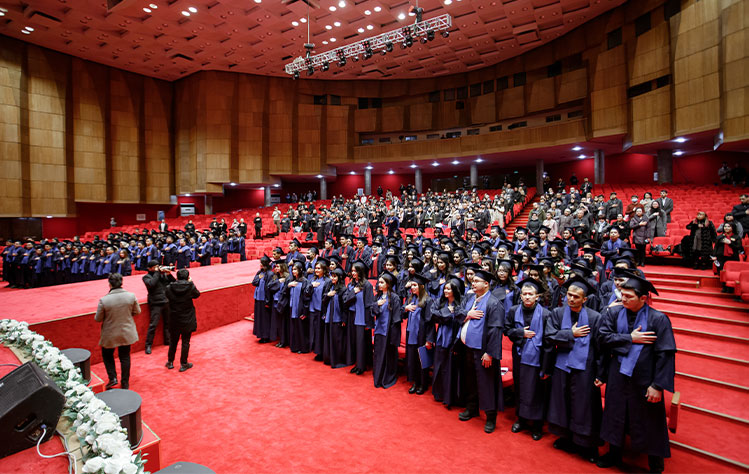 Representatives of Webster’s main campus and global campuses were present and said a few words to the graduating class: Jeanelle Wiley, assistant chancellor, secretary of the University and senior privacy director, and Ryan Guffey, director general for global campuses.

Valedictorians Maftuna Artikova and Temur Shamsutdinov addressed their classmates, reminding them of the challenges they overcame, the experiences they shared, and knowledge they now possess. “Giving a speech is not the sort of thing that I am good at,” confessed Shamsutdinov. “During the ceremony, I was on the edge of the seat, but everything was great as the speech that I prepared was sincere and honest.”

“I [had] to reflect the whole journey within two minutes. I wanted to speak a lot and found it hard to express all my thoughts,” Artikova later shared in an email interview, explaining that it was tough to formulate a way to say everything she had in mind. When delivering her speech, Artikova was overcome with emotions: “I was not able to hide [my feelings] and even tears appeared on my face at some point.”

After each “TESLer”—as students and alumni of the program tend to be called—walked across the stage, it was mentioned that they are now and forever Webster family. Of what he thought was most valuable about studying in the program, Shamsutdinov said, “I am grateful that I am a part of a big family of teachers now. I really appreciate the knowledge and experience I got at Webster.”

“The program’s practicality and the opportunity to apply everything we have learned into practice” was Artikova’s response to what she found most valuable. “We all had a roller coaster ride. From reading hundreds of pages of articles and book chapters to pending canvas assignments, we were stressed out over countless deadlines. But we went through all these challenges through ways that we could have never thought of before.”

When the moment finally came for the graduates to toss their caps into the air, they were ready. With a single motion, the sharp arcs of nearly 200 caps rising and falling signified a full stop in their master’s degree. The ceremony was over and finally, the newly minted alumni had a chance to reunite with the faculty who had taught them for an entire academic year. “TESL instructors are the ‘gurus’ of teaching that had a great impact on me and shaped me as a teacher,” said Shamsutdinov. Many graduates presented their former teachers with flowers, took photos and caught up on everything that had changed since their last class together.

In an email interview, Shamsutdinov said that back in the late spring, at the end of his graduate studies, he was very concerned about finding a job that would make him happy. However, he managed to secure a position at one of the foreign universities in Tashkent as an EFL/ESP instructor. The message he says he would like to share with current and future TESL students is “do not be afraid, grow professionally, get experience and you will be heard and find a job of your dream, as Webster opens opportunities for all students.”

Webster Tashkent wishes the MA TESL class of 2021 all the best. We look forward to learning of your personal and professional success for many years to come. Congratulations!

Tamara Rodney, a student in the in the Ed.D. program, Professor Professor Yin Lam Lee-Johnson and Professor Basiyr Rodney all led presentations during...