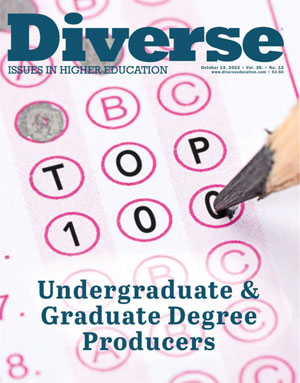 Webster University conferred more graduate degrees to students who identify as an ethnic minority than any other university in Missouri, according to Diverse Issues in Higher Education magazine. For the 31st year in a row, Webster was listed in the magazine’s annual ranking of the 100 top institutions of higher education that conferred the most undergraduate and graduate degrees to students who identify as Black, Asian, Latino or Native American.

The magazine separately lists the number of bachelor’s degrees, master’s degrees and doctoral degrees conferred overall by each institution in the country and then breaks them down by ethnicity. Webster ranked first in Missouri for the most graduate degrees awarded to students who self-identify as ethnic minorities, as well as first in the categories of graduate degrees to Black students and graduate degrees to Native American students.

“For more than three decades, Webster University has been recognized by Diverse Issues in Higher Education for leadership in meeting the educational needs of students and their communities,” said Webster University Chancellor Elizabeth (Beth) J. Stroble. “Since our founding, Webster has drawn its strength from the diversity of its students and has opened doors for thousands of graduates over the years, providing them with a strong foundation for their future. Our commitment to excellence is based on a model of inclusion: assuring both access and success for a singularly diverse student body.”

The study is the only national report of graduate degrees earned by Black, Hispanic, Asian American and Native American students by U.S. colleges and universities. The rankings were compiled using data collected by the U.S. Department of Education during the 2019-2020 academic year. The complete DIHE “Top 100” survey can be found in the Oct. 13 issue of the magazine.

“Webster’s commitment to diversity, equity and inclusion is a core tenet of everything that we do, and a primary ingredient to our success,” said Webster University President Julian Z. Schuster. “By having a diverse student body, we strengthen our academic offerings because the variations in opinions and experiences add multiple dimensions to classroom discussions and academic projects.”

For the past decade, U.S. News & World Report ranked Webster University among the most economically diverse universities in the country. This ranking cites the high percentage of Webster students receiving Pell Grants, indicating they come from households whose incomes are less than $52,000 per year.

Webster University has been recognized by the ALL IN Campus Democracy Challenge as a 2022 ALL IN Most Engaged Campuses for College Student Voting,...