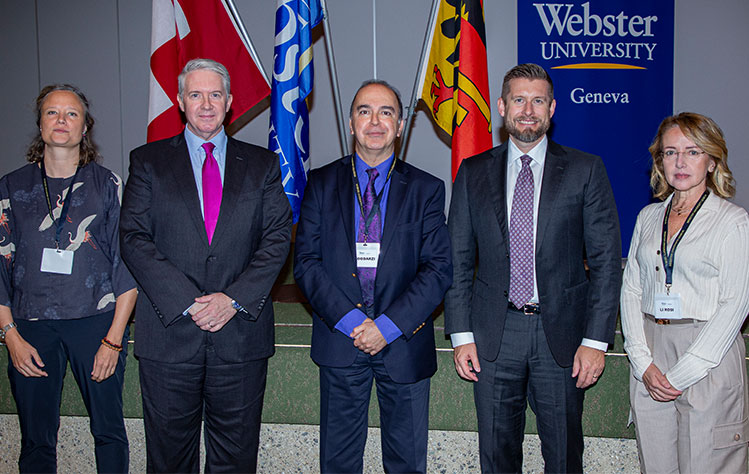 The International Relations Program at Webster University’s Geneva campus held its 27th Annual International Humanitarian and Security Conference (IHSC) on November 1-2 at the International Conference Center Geneva (ICCG) in Switzerland. The title of this year’s conference was “The Current Challenges to International Peace and Cooperation: The Search for Solutions.”

While the Russian invasion of Ukraine and its humanitarian and security consequences were a major focus, the conference expanded on developments relating to the conflict to cover key issues regarding diplomacy, peace building, respect for human rights and international law, defending the rights and dignity of refugees and migrants, access to healthcare and the challenge of climate change. The primary purpose of the conference was to assess the nature and impact of these challenges as well as how the international community could respond to them in an effective manner.

The conference was organized with the support and under the auspices of the Government of the Canton and Republic of Geneva, and in cooperation with the University’s longstanding partners, most notably the United Nations High Commissioner for Refugees (UNHCR), the International Committee of the Red Cross (ICRC), other major international organizations and the student-led NGO, the Webster Humanitarian Association (WHA).

UNHCR keynote speaker Angela Li Rosi, highlighted that the Russian invasion of Ukraine had produced the largest and fastest refugee crisis in Europe since the second World War. She said that 7.2 million Ukrainians fled their country while another 6 million Ukrainians have been internally displaced. The 27 member states of the European Union have agreed on a common policy to accommodate and help refugees, while the UNHCR and other humanitarian organization have been involved from the outset in assisting them.

Daniel McNicholas from the U.S. Permanent Mission in Geneva also delivered a keynote address. McNicholas shed light on the war’s impact on world food supplies and how Ukrainian grain exports have been disrupted. Consequently, at least 21 million people in Africa face food insecurities, while 300,000 in the Horn of Africa could face famine. McNicholas also stated that Washington has provided $1.5 billion in humanitarian aid in response to the Ukraine war and its fallout.

There was much discussion about the Ukraine conflict and its political ramifications regionally and internationally, as well as the need to uphold international humanitarian law and human rights law in the subsequent sessions.

Katia Papagianni of the Center for Humanitarian Dialogue asserted that in contrast to the 1990s and the early 2000s, it has become far more problematic to achieve comprehensive peace agreements between warring parties since most conflicts are between local actors. Presently, there are over 600 armed non-state actors in the world. Peacebuilding is possible, but it is more complicated since multi-level mediation needs to be undertaken with the participation of local, national, regional and international actors quite often. In relation to this problem, in another session on refugees and displaced people, Madeline Garlick of the UNHCR pointed out that in 2022, the number of people who have had to flee their homes had surpassed 100 million. Sixty percent of them are internally displaced within their own country due to domestic conflict and other factors. Almost 24 million have been displaced due to natural disasters caused or aggravated by climate change. This has been primarily in the Global South.

Overall, one out of every 78 people on the planet is now displaced. It was mentioned that contrary to popular perceptions in the Global North, three-quarters of all refugees are hosted in low or middle-income countries in the developing world.

Michel Veuthey, associate professor of International Law at Webster Geneva, highlighted that there are over 50 million people living in slavery in the  world, with some 1.3 million in Europe. Seventy percent are women who are forced to do arduous work and/or are exploited sexually. While the 1998 Rome Statute is an important international legal instrument to combat human trafficking, much more needs to be done to combat this problem. Furthermore, Daniella Ritzau-Reid of the NGO Doctors Without Borders exposed the mistreatment and abuse that many refugees and immigrants from the Middle East and other regions experience at the hands of the national authorities and border police as they try to cross the Aegean Sea from the Middle East to Europe.

On the second day of the conference, Teresa Zakaria of the World Health Organization discussed the consequences of the COVID-19 pandemic and the lessons learned. She shared that the virus claimed the lives of some 6.5 million people with at least 624 million confirmed cases; however, limitations of healthcare systems in developing countries, particularly the absence of the means to perform effective testing, led Zakaria to believe that the actual number of people infected by the virus globally was much higher.

She underscored that women and children were particularly vulnerable due to lack of testing and proper medical care. Moreover, a sizeable percentage of healthcare works are women and are not in positions of decision-making, hence they are far more vulnerable to becoming infected and ill, dying or suffering from burn out due to the pressures and demands during the pandemic. Another consequence was that testing and screening for many other diseases, including cancer, was suspended. Zakaria advocated strengthening healthcare services in developing countries, improving preparedness by involving local communities, and tackling the root causes of poverty, inequality and conflict that often impede the existence and delivery of effective healthcare.

During the session on global healthcare and lessons learned from the pandemic, Sophie Sutrich from the ICRC estimated that at least 180 million people in the world who live in areas controlled by armed groups lack proper access to healthcare. She emphasized that in many countries COVID-19 was not the key priority as people were grappling with other deadly diseases. Sutrich pointed out that there needs to be a country-by-country approach for creating and improving healthcare systems. There is no one-size-fits-all approach. Echoing the statements of Zakaria, she argued that local communities need to be involved in the process of enhancing healthcare services. Other speakers made similar points and shed light on the issue of patents and patent-waivers to ensure fair access to vaccines by the people. While 80% of people in the developed world were vaccinated during the first two years of the pandemic, the figure in the developing world stood at 11%.

In his keynote address, Ambassador Asim Ahmed of the island state of the Maldives underscored that during the 1992 Rio de Janeiro Earth Summit, the vulnerability of island states to climate change had already been officially recognized. He outlined the steps that his country has taken to combat rising sea levels – a direct consequence of the warming of the planet. He noted that these costly efforts have sunk the Maldives deeper into debt.

Ambassador Ahmed stated that the world has fallen short of the goals set at the 2016 Paris Agreement. He urged the international community to do more to live up to its commitments and provide debt relief to his country and others in a similar situation.

In addition, during the session on climate change, Eva Mach from the International Organization for Migration explained that at present 8% of the world’s population is exposed to extreme water shortages, while 2.4 billion people will experience water scarcity in the coming years of this decade already. In the long term, some 30 to 60 million people are living in areas which will be too hot to inhabit before the end of this century. She asserted that heat exposure is linked to forced migration movements in Sub-Saharan Africa where people are extremely vulnerable. It was also mentioned that, paradoxically, dam projects undertaken to make more effective use of water resources have contributed to the displacement of 80 million people worldwide.

Overall, the 27th IHSC addressed and shed light on a whole host of pressing issues related to war, disease and climate change thanks to the invaluable contributions of the speakers and participants. Webster University’s Geneva campus plans to continue the proud tradition of organizing the IHSC next year when the conference is scheduled to take place on November 21-22, 2023.