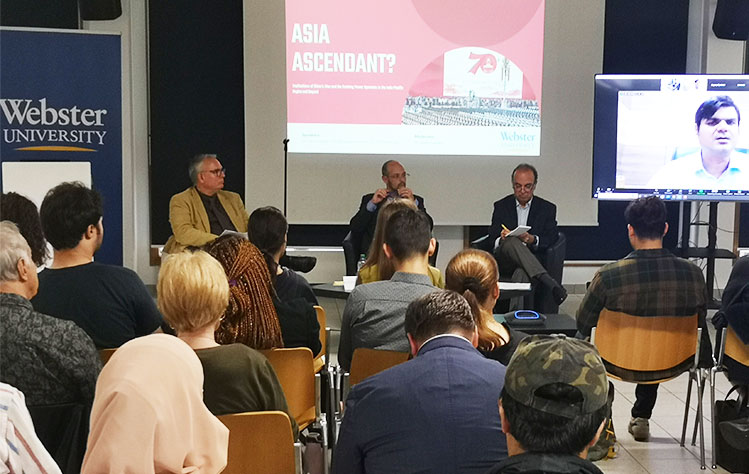 Webster Geneva’s International Relations Program welcomed a panel of experts to the symposium “Asia Ascendant: Implications of China’s Rise and the Evolving Power Dynamics in the Indo-Pacific Region and Beyond,” held Sept. 15 on the University’s campus in Geneva, Switzerland. 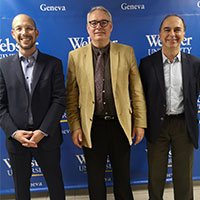 Participants in the panel included Lionel Fatton, assistant professor of International Relations at Webster Geneva, Alexandre Lambert, academic director of the Geneva Institute of Geopolitical Studies, and Faisal Ahmed, professor of International Business at the FORE School of Management in New Delhi, India. Jubin Goodarzi, acting director of the International Relations Program at Webster Geneva, moderated the event. The panel discussed the substantial economic growth and development experienced by multiple Asian countries over the span of the last 50 years with special emphasis on China.

Opening with a discussion of the economic reforms in the late 1970s that led to over 400 million Chinese being lifted out of poverty, and the country’s rise to the second largest economy in the world, the experts then turned to modern-day observations about China’s changing economic and political dynamics. They discussed multiple factors that impact its current status as the world’s top exporter and trading partner to over 130 countries. Each expert shared insights that often emphasized discrepancies between Western perception of popular thought and actual data.

Lambert highlighted that China, which has the greatest foreign currency reserves in the world and largest economy in terms of gross domestic product based on purchasing power parity, has grown its middle class to over 800 million people. He explained that China, Russia and India have established alternative regional and international organizations, such as the Shanghai Cooperation Organization, and that contrary to what many in the West believe, 85% of the world’s population opposes the imposition of sanctions against Russia for its invasion of Ukraine.

Ahmed discussed how the 2017 U.S. National Security Strategy paper designated China as a challenge to the United States, and underscored that India, the world’s largest democracy and a major trading partner with China, does not want to be seen as taking a position against Beijing. He argued that contrary to popular belief, in spite of the COVID-19 pandemic and China’s initial mishandling of the crisis, most foreign companies have not withdrawn from China and many remain dependent on the country for trade and investment.

Fatton cautioned that although China’s accomplishments have been impressive, the country has faced formidable domestic obstacles. Among them, he cited the economic implications of China’s aging population as the Chinese continue to have less children. He also discussed the potential for liberal politicians to lose power in the forthcoming Congress of the Chinese Communist Party and the wide-ranging challenges that could result.

Well-attended by students, faculty, staff and the community at large, the panel was the first of several events to be hosted by Webster Geneva this Fall. Among the most prominent will be the 27th Annual International Humanitarian and Security Conference, to be held at the Geneva International Conference Center in early November. The hybrid event will host attendees in person while simultaneously broadcasting a live feed for world-wide participants to follow online.