ST. LOUIS – In a historic moment on Jan. 21, 2002, Webster University signed the Statement of Support from the U.S. Department of Defense’s Office of Employee Support of the Guard and the Reserve (ESGR) to expand protective rights to students who are also in the national guard or military reserves. Webster is the first University to enter the agreement in order to highlight the rights of students who serve.

Webster pledges its commitment to protect the rights of our students who are also members of the national guard and reserve.”

Currently, multiple state and federal laws protect the rights of employees who are in the national guard or military reserve, but there is no law that extends those rights to students. Those rights include being able to immediately resume their studies after an active-duty interruption, quickly transfer work and course credits to other locations in case of reassignment, and to switch between online and in-person classrooms without impacting their academic progress because of a reassignment. 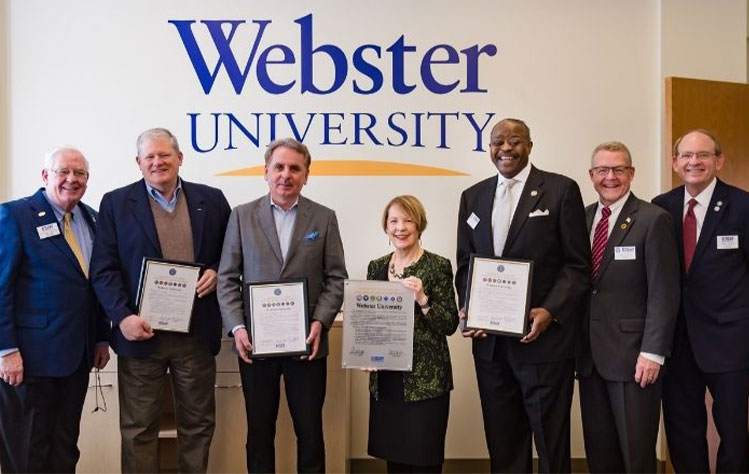 “Webster University’s history of partnerships with the military stretches back to World War I and includes the creation of several collaborative programs between the military, veterans’ organizations and the University that benefitted those who served,” said Webster University Chancellor Elizabeth (Beth) J. Stroble. “I am proud to be able to continue that history with today’s ceremony.”

“Webster pledges its commitment to protect the rights of our students who are also members of the national guard and reserve,” said Webster University President Julian Z. Schuster. “Webster’s Office of Military Affairs already provides many of these protections to our students in the service, but today’s signature makes our historic promise to help the men and women in uniform pursue an education a matter of the public record.”

The Department of Defense created the ESGR program in 1972 to raise awareness of the hardships that national guard and reserve members faced from employers. It was not uncommon then for volunteer soldiers to find that their jobs were filled during the weeks or months they spent while serving their country, or to find difficulties in finding long-term employment because of an employer’s reluctance to hire an employee who may be called away by the military at a moment’s notice.

In 1994, Congress passed the Uniformed Services Employment and Reemployment Rights Act (USERRA) which created some rights for national guard and reserve members and established a system to resolve disputes between employees and their employers regarding such issues as deployments and return. Today, every state in the United States has an ESGR office.

The Department of Defense created the ESGR program in 1972 to raise awareness of the hardships that national guard and reserve members faced from employers.

“While the law provides protections for employer-employee relations, it does not extend those same protections to students,” said Ben Brink, Webster University’s senior director of Military Campus Operations and the former director of Missouri’s ESGR program. “Webster has a very good record in its treatment of reserve and guard students and already offers, among other things, family military pricing, a solid transfer credit program, flexibility in modality of study, and faculty attuned to students with military commitments. 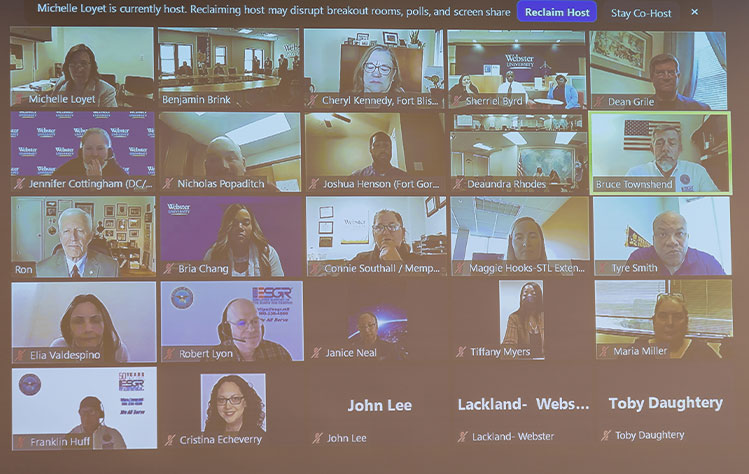 “Because of Webster’s historic support of the Department of Defense, from selling record numbers of War Bonds during World War II to being one of the first institutions of higher education to offer classes on a military base, which we have been doing for 48 years, the Department of Defense invited us to sign the ESGR Statement of Support, in the hopes that other universities and colleges will soon follow suit,” Brink added.

Friday’s signing ceremony was attended by Stroble, Schuster, Brink, Webster University military advisor retired Brig. Gen. Scott Wuesthoff, and current and past members of Missouri’s ESGR office. Representatives from the Department of Defense and from some of the military bases that Webster University currently offers educational services also attended via a Zoom connection.

Visit www.webster.edu/military/military-affairs-office.php to learn more about Webster’s programs for veterans, current members of the military and their families.

Daniel Belo was a speaker at the recent Global Counter Terrorism Council in India...Paula Hanssen published an article in the The Brecht Yearbook/Das...

In a historic moment on Jan. 21, Webster signed the Statement of Support from the DOD’s Office of Employee Support of the Guard and the Reserve...