Never Too Late: Student completes degree with encouragement of faculty 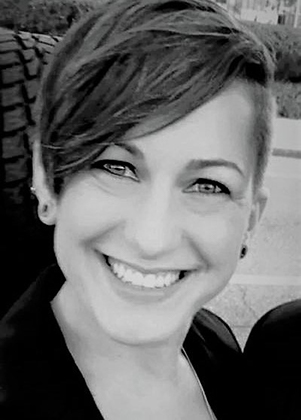 Webster University alumna and current MBA student Kelsey Templeton, BA ‘11, shares a story to which many students can relate. As an undergraduate student, Kelsey was active on campus. She served as president of the Webster LGBTQ+ Alliance and studied abroad.

While she was a traditional four-year student at Webster in 2007, due to her father’s cancer diagnosis she was forced to step away from her studies in order to help her family.

Before she knew it, three years had passed and going back to college seemed daunting since she was working full-time as a manager in the hospitality industry. A public relations major at the time, Kelsey was only a few credit hours short of completing her degree and found herself feeling ashamed for not finishing her program.

Templeton knew she wanted to get her degree but didn’t know how to restart the process. “I put up these walls in my head that it was unachievable once I was out of the system,” she said.

But years ago on July 4, Associate Professor Gary Ford reached out to her on Facebook to see how she was doing. Ford, who has taught at Webster for nearly 30 years and is department chair of Communications and Journalism in the School of Communications, asked if she wanted to come back to finish her public relations degree.

Today, Templeton is glad he did.

There is a level of care that comes from Webster professors and advisors that you don’t see elsewhere.

“Immediately upon setting foot at Webster, this was home," she said. "There is a level of care that comes from Webster professors and advisors that you don’t see elsewhere.”

Ford is just one example of that care among Webster faculty members. Prior to being selected department chair, he served as the director of graduate studies for the School of Communications for five years. He has also coordinated the undergraduate public relations program since 2003.

“I like to work with students and help them meet their challenges," Ford said. "One of the best things I can do for a student is prepare them for reality in their jobs later on in life.”

“Gary was very casual and offered to help me through the process of re-enrolling," Templeton recalled. "He encouraged me and made coming back [to Webster] so approachable. He made it feel like it was okay to come back without any shame.”

Asked about his outreach, Ford remembered: “I would think of her from time to time. Kelsey was a good student, but I could tell something was wrong and reached out.”

With Ford's help, Templeton was able to achieve her goal of completing her degree program, receiving a Bachelor of Arts in Public Relations in 2011.

Ford said students like Templeton are not uncommon. When she graduated, it was “fulfilling for me and an opportunity for her," he said.

Today, Templeton is the director of Hospitality and Audience Experience with the St. Louis Symphony Orchestra and is pursuing her Master of Business Administration in Webster University’s George Walker School of Business and Technology.