NEW YORK - When Drew Jordan started working as a motion designer for the New York Times, he never thought he’d end up winning one of the highest honors in the journalism industry, but he did. After working with a team of journalists on two ground-breaking stories that proved that Russia was engaging in shadow warfare in Syria, he, along with the whole team, was awarded the coveted Pulitzer Prize. His award was announced earlier this month.

Jordan, who graduated from Webster University in 2005 with a BA in photography, wore many different career hats before landing at the New York Times doing visual effects. “I started off in commercial photography and photo illustration after leaving Webster, then got into video journalism, design, and animation during grad school,” he said.

But through all of his careers, he said that the most important thing to him has always been to keep a focus on helping inform others. “Whether as a journalist, occasional instructor, or creative director, it’s always been important to me to educate others through stories,” he said. And all the skills he’s learned helps him do that at his current job. “To work on a team that investigates and researches cutting edge stories feels like I've taken a career full of acquired tools and finally found one box to put them all in.”

Winning the Pulitzer was very surreal, according to Jordan. “As a motion designer it is very hard to imagine a path that would lead to this,” he said. “As a motion designer who is also a journalist, it is certainly a goal or dream but not something that is often connected to video. Our team has been making such strides in this form of open source investigation over the past few years that at a certain point it felt that the potential for this sort of recognition was there, but ultimately no one does the work with awards in mind.”

Jordan said that he was with his wife and 7-month-old daughter when he found out that he and his team had won the Pulitzer. “I think we were inside watching a movie on a Sunday. In the middle of a pandemic, in the middle of New York City, with an infant, pretty much everything is hot lava outside of our building. So, to have such mind-blowing news was a welcome ecstatic feeling to share with my family and coworkers,” he said. “My wife threw me a surprise Zoom party where a ton of my family and friends were hanging out. So that was unique and special.” 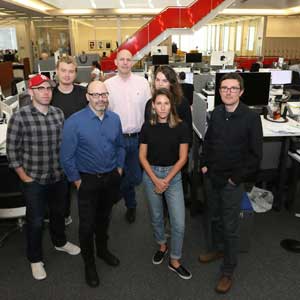 His life returned to normal quickly, he said. “As soon as the team got back to work on new stories a few days later it was like, ‘ok, well let’s get back to it.’  I think the adrenaline gets replaced by a deeper pride feeling that you just kind of keep and sit with. Like, ‘well, no matter what happens in my career from now on, I have this,’” he said.

“It feels like an amazing self-validation for sticking out the rough times,” Jordan continued. “The team, with the groundbreaking reporting that they do, would undoubtedly be making just as stellar work had I never started at the Times. But this certainly reminds me that the level of work I'm contributing to our team is only from years of learning, pushing, and seeing it through.”

“As far as next steps, who knows?” Jordan said. “I’ve always loved telling stories, the creative process, and trying to learn, so I suppose whatever involves those three. I’m just excited to see where all of this takes me next. I’d love to direct a bit more in the future, spend more time with my daughter, and instruct at some point.”

Jordan said that there are many things graduating students can do to achieve similar successes in their careers. “Be varied, be interested in anything and everything,” he said. “Don't beat yourself up. Ever. As long as you’re trying to learn and working on it, there is progress even when you don't see it. Don’t think about every project or piece you make as a steppingstone in your career but rather worry about the process and learning as much as you can all the time.”

Jordan continued, “Be averse to saying no to projects unless it goes against your core values or morals. You will find jobs or assignments that bring knowledge you didn't know you needed until years later. Some assignments you didn't think you’d ever take on will lead to new interests, clients, hobbies, and friends.”

Jordan also shared a couple things that he said he wished he’d been told that he had to figure out on his own. “Treat the path more like a series of plateaus than a constant uphill climb that has a ‘peak.’ You will learn and grow and then stall, and that's ok, because eventually you'll practice and build your skills until you break through and keep climbing to the next plateau,” he said. “And fake it till you make it is a myth. We are all faking it all the time because we are just learning as the assignment or job needs us to. You aren't faking anything by learning on the go.”

“Lastly, don't make awards your goals. Make new skills and seeing pieces through from imagination to creation your goals."