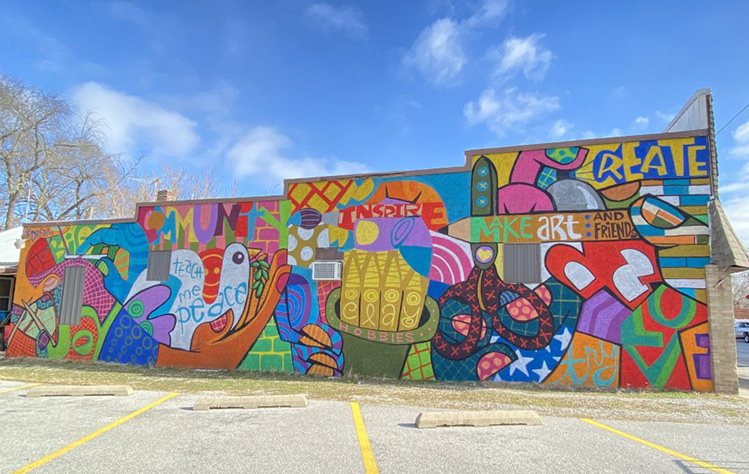 A mural by international visual artist Cbabi Bayoc is now in Staunton, Illinois, thanks to a partnership with the Chicago Community Foundation and The Macoupin Art Collective, which is directed by Webster University alumna Brandace Cloud.

Cloud, who grew up in Staunton, is the MAC’s founder and executive director. She has an Associate of Art degree in Graphic Design from Lewis & Clark Community College, a Bachelor of Art degree from Webster University (‘11), and she attended post-graduate studies in the ceramics department at Southern Illinois University, Edwardsville.

The Mural Project began Dec. 27, 2020, when Bayoc began work on a one-of-a-kind piece over 10 days at 115 E Main Street. In addition to the mural in Staunton, Cbabi will be helping the MAC to reach our local art teachers to share the process of creating murals, with the hope that they can create their very own mural in their communities.

Cbabi (pronounced Kuh-bob-bi) Bayoc is an internationally-known visual artist and illustrator residing in St. Louis, Missouri. His subjects include family, children, music and a bunch of other cool stuff designed with line, bold color and phunk!

He was a guest along with Dail Chambers on the Oct. 28, 2020, episode of Webster Speaks: Dialogues on RACE, EQUITY and INCLUSION. That episode covered the theme of "Activism Through Art."

Over the years, Cbabi has worked with a variety of clients. Some notable clientele includes Anheuser-Busch, Coca-Cola, New Line Cinema, St. Louis Post-Dispatch and MCA Records.

In 2012, Bayoc began his "365 Days with Dad" series. This New Year’s resolution to paint a positive image of black fatherhood each day for the entire year resulted in a journey that was inspiring (and exhausting!), ultimately resulting in the sharing of many stories of good experiences, no experience and hopeful experiences of Dads of all life stages. The project started a dialogue within the community about the importance of a strong foundation and support system for all children, no matter the age.

Today, Cbabi spends his time working on a variety of projects, including portraits, community murals, school murals, children’s book illustrations and is always up for a new challenge. He likes traveling to schools and talking with students about their own power in determining their destiny, using his own life experiences as lessons.

On Feb. 19 from 5-6 p.m., the Hunt Gallery is opening a virtual exhibition of works by multimedia artist Rebecca Olsen, titled "River of Consciousness."...